Central Library: a magnificent achievement, shame about the glazed link

The glazed link on Library Walk has been described as ‘ugly, unwanted and an act of cultural vandalism.’ Which is a shame, because the revitalised Central Library is a magnificent achievement and one of the best public libraries in the UK, if not the world, says Aidan O’Rourke…

I love the Central Library. It’s my favourite building in Manchester. I love what’s in it. Books, archives, media, local history, images and goodness knows what else. I love what it represents-the spirit of learning, the celebration of Manchester. I also love the style of architecture – 1930s neo-Classical. It’s ‘my’ library. It ‘belongs’ to me, at least as a local citizen it does. It opened in 1934. At first clean, shiny and spacious, it became more cluttered over time. It preserved a strong aura of the inter-war years.

I studied for my A levels there, researched books and websites, listened to language courses on vinyl in the Languages and Literature library, leafed through music books in the Music Library, art books in the Art Library, business listings in the Business Library and local images in the Local Studies Library. I sat in the gigantic reading room, browsing newspapers on microfilm and enjoyed gently tapping my books on the table to get that distinctive echo from the high ceiling. The library had a distinctive smell, like disinfectant.

I took breaks for tea and coffee in the basement cafe, watched plays in the theatre, met friends under the entrance portico. I enjoyed escaping from the present day by strolling along Library Walk. On an open weekend in 1998, I went on a midnight tour of the stacks – the areas below the reading room containing thousands of shelves with books. There was a firework display that lit up St Peter’s Square. I wrote a feature for my website, took photos of the exterior before and after cleaning. I rode up and down many times on that tiny, rickety lift with the metallic lady’s voice with a genteel accent: “Lift going up. First floor! Lift going ‘dine’. ‘Grind’ floor”.

And then in 2011, the library closed for renovation. They didn’t ask for my permission. Ah well, there must have been some mistake, but I’ve forgiven them now. A temporary library was set up in Elliott House, Deansgate, which was actually a very nice place. I went there many times. Meanwhile massive work was carried out inside the shell of the building. The stacks were ripped out, floors were removed, the interior structure of the library was transformed. 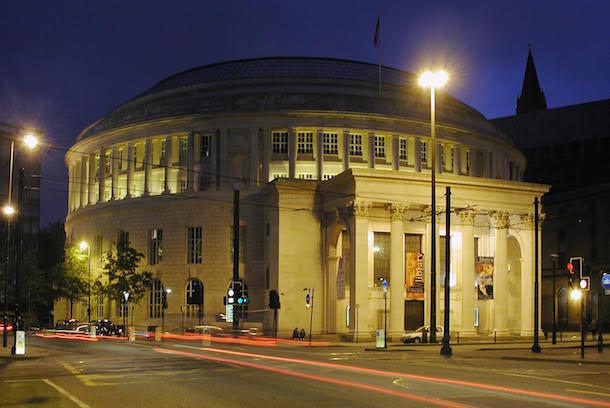 It re-opened on Saturday, 22 March 2014. What a strange feeling to walk inside again. I felt a sense of disorientation. No steps up to the Business Library to the left, no tiny lift in the middle but a doorway to a new reality in the form of a big, round, communal area with a state of the art local archives centre on the left and a cafe on the right. Some of the stacks were preserved in a kind of shop window display in the far corner, but the rest was totally new. Exploring the building was like walking through a 3D visualisation except that this was reality. I tapped the walls to make sure they existed.

On the first floor, the reading room was virtually the same as before, thank goodness, except that the central counter was now empty, with just a view down to the cafe and Archives below. The echo was still there, but the distinctive smell was gone.

Taking one of the futuristic new lifts, I explored the upper parts of the building where the Modern Languages library used to be. Now a place with motorised shelves controlled with buttons. I was afraid of getting squashed in between them. Finally, I took the new stairs all the way down to the basement. I thought it was cool how the library extends under Library Walk into the town hall extension. Now there was even more space than before.

I tweeted my verdict on the new library: “RIP the old Central Library, long live the new.”

When I first saw plans for the underground link I thought it was a great idea and made a surface link unnecessary. But later in the planning phase, I was dismayed to see plans for a ‘glazed link’ to be added at ground level within Library Walk. That’s the only negative part of the renovation. Whilst I’m very enthusiastic about the redesign on the inside, putting a clumsy glass cylindrical structure on the outside ruins the architecture and also blocks a right of way that existed since 1937 and has now been extinguished. Yes, it will be open during the day but the new structure partially blocks the way and will be closed from later in the evening until morning.

Both buildings are Grade II listed, so the new structure had to be built in a way that it can be removed. I think it will be in due course.

The revitalised Central Library is a magnificent achievement and one of the best public libraries in the UK, if not the world. I’ve already gone to events, researched newspapers, read books and updated my website using the wifi. I’m a regular visitor to the cafe. I’ve met up with friends, worked with a proofreader for my upcoming novel or just sat there for a while enjoying a mug of tea and a piece of cake. The Central Library isn’t just a place to be admired, it’s a place to be used. So go and use it!

Looking into the glazed link with its mosaic floor, opening soon in Library Walk. How long will it last? pic.twitter.com/h3Jim6EQVh