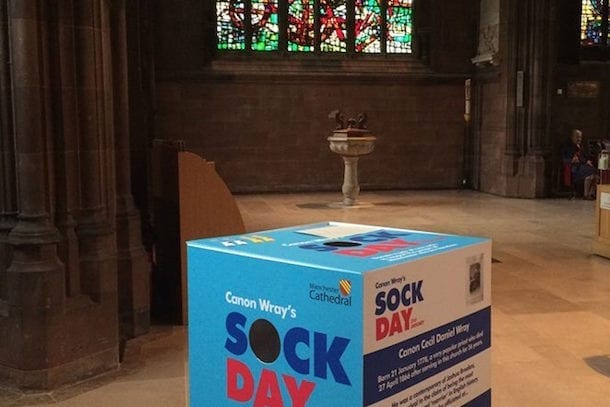 At this time of year as the night time temperatures are plummeting Manchester Cathedral is looking to the legacy of one of their great historic characters, Canon Wray, to support the Booth Centre in their work with people finding themselves cold and homeless on the streets of Manchester in the New Year.

Canon Cecil Wray was a very popular, if slightly eccentric, priest who died in 1866 after serving in this church for 56 years. He was a contemporary of Joshua Brookes, and a rival to the claim of being the most prolific baptiser and ‘marrier’ in English history. Records show that he presided over 33,211 christenings, 13,196 marriages and 9996 funerals as a result of the massive growth in population during the Industrial Revolution.

Canon Wray was not afraid to speak his mind or get involved in Manchester’s political and social issues. He campaigned for new schools, the reduction of the working day to 10 hours for mill workers and was known for his sympathy for the needs of the poor.

Canon Wray’s Birthday Gift’ is a fund he set up in 1866 for the provision of socks for the poor on the anniversary of his birthday. From now up until the 21 January we will be collecting socks, new pairs or any surplus pairs received over Christmas which we will then hand over to the Booth Centre for distribution.

“We are keen to support the excellent work of the Booth Centre in any way we can and encourage the team here at the Cathedral and the Clergy to help by donating to this appeal” Said The Dean of Manchester, the Very Reverend Rogers Govender.

So this is a chance to empty your overcrowded sock drawer into Canon Wray’s very own the sock box, designed and made for free by the kind folk at Transmission Creative Design and ASAP Digital.

Watch out for a line-up of famous faces dropping in to donate socks. Donations also welcome from businesses clearing out winter stock.