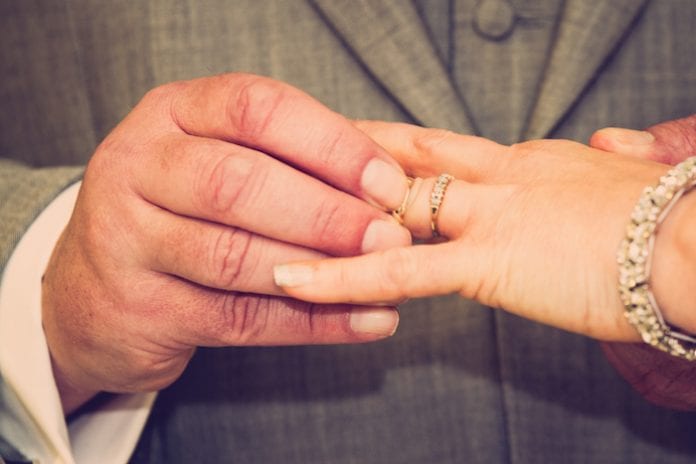 Wedding planner Patricia Harrison remembers having coffee with a friend one day who told her about a 27 year-old who only had 14 months to live and really wanted to get married before he lost the ability to walk because of brain cancer.

She offered to help him with his wedding but didn’t realise that they wouldn’t have any money to pay for it.

Determined not to let finances get in her way, Patricia reached out to all her contacts in the trade.

“I just started asking everybody would they donate things for this chap’s wedding and we managed to get nearly £18,000 worth of services,” she remembers.

Thinking there must be other people in the same situation, Patricia did some research and discovered that terminally ill people who want to have a wedding either borrow money from friends and family, try to fundraise or go to newspapers and social media and beg for help.

“With friends and family, they will never be able to get their money back. With fundraising, it’s really time consuming and someone who is terminally ill doesn’t have the time to do that.

“Newspapers wouldn’t take the time to find out who they were accepting services from. Anyone could say they’re a photographer or a videographer. It’s about what kind of quality you get and how reliable people are.”

She started Gift of a Wedding, a charity providing free weddings to people who are terminally ill, about seven years ago. But because they get their clients through the medical system, it took a while for them to prove they are reliable themselves: “We had to earn the trust of people like The Christie and then it sort of kicked off in 2015.” Now they gift around 50 weddings every year.

“Unfortunately not all of them come to completion because people fall ill and sometimes they pass away beforehand. But we’ve done about 180 weddings and most of them have been in the last three years.”

When I ask about the most challenging aspect of her work, Patricia says it varies from one wedding to the other, but that it’s mostly logistics since they try to offer couples everything they dream of.

“Things don’t come easy. Within reason, there is no barrier to what a couple can ask for. So, for example, we just had a wedding where they wanted an owl as a ring bearer.

“Or one person could ask for a harpist, which is not something many people would do in England. But in Wales, it’s part of their culture, and the same about bagpipes in Scotland.

“Also, depending on what part of the country you’re dealing with, some places might have more wedding planners than others. So in London and Manchester there are loads but in south Wales there might not be a great deal.”

How does she manage to remain positive, working with people who usually only have between three and six months to live?  Patricia says it’s all about seeing the bigger picture.

“Because we do such a lovely thing, our charity is actually a really happy, bubbly charity and I know that probably sounds a bit strange. All they have is darkness, but what we do is we bring them some light.

“We put them in a bubble where they can forget about everything that’s happening health wise and focus on this fantastic day me and my brilliant team will create for them.”

Their weddings are always well attended, despite only taking place during the week.

“We’ve had weddings where we only had seven days to put them together, and even if people had to take a sickie from work, they were there.

“If a person has invited 50 people to a wedding breakfast we generally have 50 people turning up.

“They want to be there because there’s a really big chance that this will be the last time.”