Disneyland Paris was the destination for a number of families affected by the Manchester Arena bombing, who flew out from Manchester Airport for a star-studded day out before Christmas.

The group included youngsters who attended the Ariana Grande concert on May 22 and relatives who lost loved ones in the attack.

The trip was part of Flying Start, British Airways global charity partnership with Comic  Relief, which has reached a massive £17 million since starting in 2010. 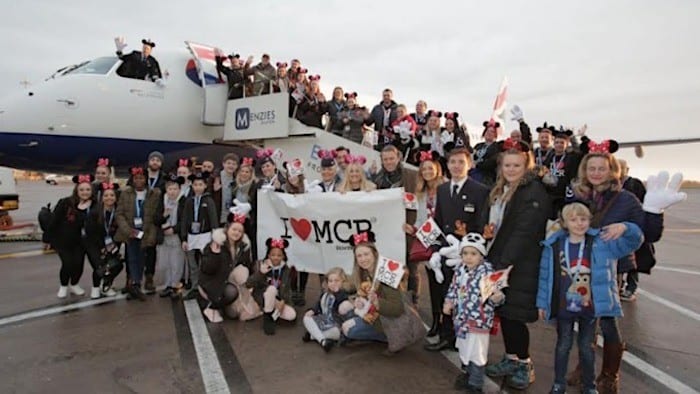 It meant that some of families affected by the terror attack could come together for a positive occasion towards the end of a difficult year and could meet some of the British Airways celebrity ambassadors too.

The families boarded the British Airways Charity Disney Flight early on Tuesday morning at Manchester Airport, joined by members of the Hollyoaks cast, Michelle Keegan and her partner Mark Wright.

Amongst those who flew out were Charlotte Hodgson and husband Paul, who lost daughter Olivia Campbell in the Arena attack.

Also on the trip were sisters Aleks and Patricia Klis, who lost both parents during the bombing. They were joined by their friend Megan Hewitson who was also with them at the concert when the tragedy occurred.

In partnership with @BritishRedCross, @ILoveMCR and stars from @Hollyoaks and @TheXFactor, families affected by the Manchester bombings were treated to a special day out at @DisneylandParis. Thanks to all involved who made this an unforgettable trip. pic.twitter.com/P0fZCF5KnL

With the families on the flight from Manchester was comedian John Bishop who was quick to praise the strength of character and positivity of the trip.

The day out involved the families posing with celebrities for pictures – complete with I Love MCR banners and flags  – enjoying an on-flight breakfast and plenty of fun, rides and festivities at Disneyland.

It follows on from a year of touching tributes and efforts to help those affected by the Arena bombing, from the poignant sense of solidarity at the Albert Square vigil, to the floral tributes in St Ann’s Square, the One Love Manchester concert and an award ceremony for community heroes.