Bootcamp In The Snow at Chill Factore

A first not just for Manchester but for the world... 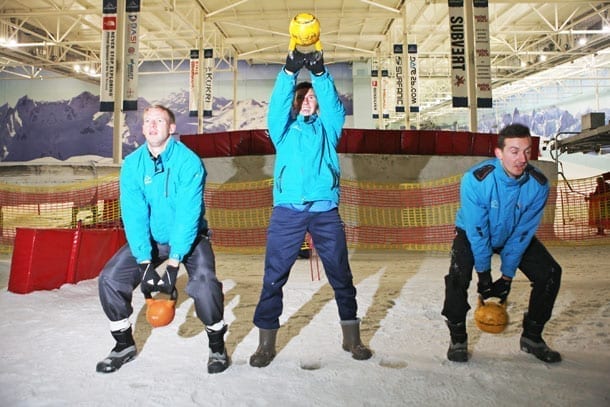 CHILL FACTORe‘S BOOTCAMP IN THE SNOW is like nothing else you will have ever experienced. Unless you’ve done a bootcamp in the snow before, of course. But then again, it probably wasn’t indoor. Anway…

“It’s a first not just for Manchester …but for the world.”

Indoor real snow centre, Chill Factore, is raring to go this year with a new unforgiving workout to challenge even the biggest of fitness fans. Launching Tuesday 14th January, Bootcamp In The Snow is set to be the latest fitness craze.

Chill Factore has teamed up with local health and fitness company Novak Health & Performance to deliver a weekly fitness session that will work in a similar way to interval training, constantly moving the body at different speeds in order to be more effective.

Due to the cold temperatures, the class will be tailored for higher intensity exercises, focusing on intense warm ups to ready the body for exercise and sustaining this status throughout the routine.

Gary Novak, head trainer at Novak Health & Performance said: “Working against the resistance of the snow gives those taking part a workout unlike anything else – it’s tougher than performing the same routine on solid ground – as it forces a your muscles to work extra hard due to the uneven terrain and texture of the snow, making it perfect for toning lower and upper legs and bum.

“The heavier clothes will also add to the workout as the body is carrying not just its own weight but that of snow boots. Of course, the -2°C temperature on the slope contributes to the easily burnt 600 calories per one hour session.”

Morwenna Angove, chief executive at Chill Factore, said: “It’s a first not just for Manchester, the region or even the UK – but for the world. We know it is going to become hugely popular and we expect it to be copied around the world once it takes off here.

“We challenge anyone who thinks they’re up to it to come and see if they’ve got what it takes. But even for those who aren’t already die-hard bootcamp junkies, we can tailor packages to suit them and give them a great way to kick start their regime in time for the summer holidays.”

Offer: 5 sessions for £40 when quoting promo code “BOOTCOURSE” at www.chillfactore.com