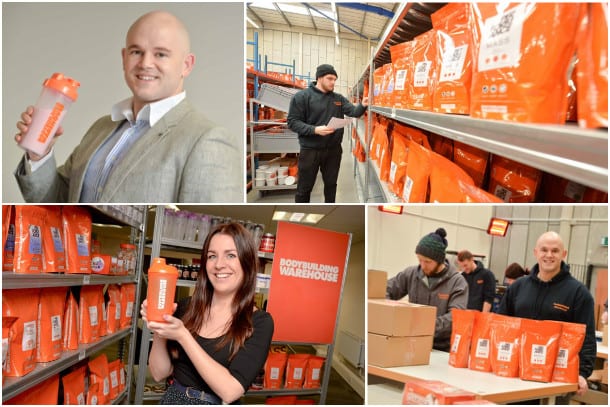 Bodybuilding Warehouse, the leading Manchester sports nutrition company, has pledged pay rises and investment for all staff in 2016 in a bid to become Manchester’s best employer…

The Bodybuilding Warehouse, which was founded in 2008, is one of the UK’s largest suppliers and manufacturers of sports nutrition products. The company, which was started by owner Kieran Fisher in the family home, has seen growth in excess of 50% year on year, with a 95% increase in order volumes.

Now the company has set its sights on becoming Manchester’s best employer and thanking all the staff who have helped the business progress.

Kieran said “We believe actions speak louder than words, and we also believe that by investing in your people you get a more passionate, driven and energetic work force who love what they do”

Employees will be receiving a wage review and pay-rise before the end of 2015 as well as increasing their benefit packages. So far in 2015, Bodybuilding Warehouse has provided training with qualifications for 73% of warehouse staff, as well as providing training for over 53% of staff in the business overall. The company runs an above average contribution to an employees pension scheme and offers a voucher scheme to support childcare.

The company has recently made an application to feature in the UK’s Best Workplaces Programme.

Kieran said, “We were a small business that’s grown to take on a 21,000 sq ft facility and we have no doubt it’s thanks to the hard work of our incredible staff. They show passion for our company and we want to say thank you for that. We want them to be able to tell people that they work in not only one of the coolest Manchester businesses, but also officially one of the best.”

This month the company have announced the launch of a new protein bar, Premium LUX Protein Flapjack, that will be manufactured in house and will be distributed via the website, with further potential for contract manufacturing.

Kieran: “There’s only two other companies in the UK who manufacture protein bars in house as it’s a truly difficult, capital intensive, and exceptionally hard thing to get right. We absolutely knew we had the passion to do it– 99% of the products we sell are manufactured right here and we’re incredibly proud to add the Premium LUX Protein Flapjack to that list too now.”

Quote ilovemcr15 for 15% off your first order!