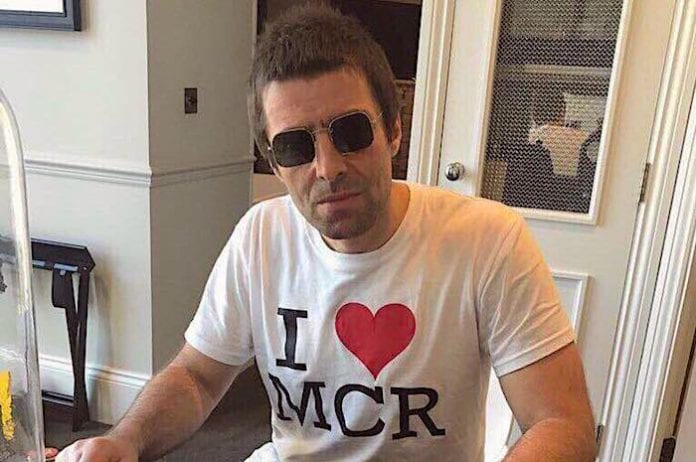 When people think of Liam Gallagher, they probably picture a snarling, swaggering, balls-to-the-wall rock’n’roller, just seconds away from flicking a V.

But sometimes, the former Oasis frontman shows glimmers of kind-heartedness and vulnerability beneath all that Manc front and bravado.

Before his debut solo gig in his home town of Manchester last Tuesday, Liam pledged the money raised from ticket sales to the families of the victims of the Manchester terror attack.

“I just knew I had to. I’m not in it for the money. The gig was going to happen anyway and we all have to do what we can. I want to try and help pick people up. People like me, doing what we do, it’s our duty to give people a good time,” he told the MEN.

After an emotional rendition of Live Forever at the gig, he said to the crowd: “Manchester, I love you, we love you, look after each other, thank you for coming out, and I’ll see you again.”

Gutted I missed the @liamgallagher gig last night. Proper gent. Up there with the best front men ever in my opinion

When we toured with Oasis he watched us from the side of the stage every night without fail. He knows much more about music than ppl think

In 2013, he invited a 14-year-old fan in off the street for an impromptu jam with him. Budding rockstar Reece Bibby had hurried out of his house without a coat when he heard the filming location for Beady Eye’s latest video shoot was near his Lancashire home.

Having spent a few hours outside the building shivering but hopeful, someone came out and told Reece that Liam was inviting him inside: “Liam hugged me and asked why I wasn’t wearing a coat. He then saw my guitar and said ‘do you know any Oasis songs?’”, Reece told the Lancashire Telegraph. Within minutes, Bibby was strumming the chords of Wonderwall and Liam was singing along before signing Reece’s guitar as a parting gift.

Seven hours after Beady Eye track Flick of the Finger was released, a young fan called Liam Holtermann uploaded an acoustic cover to YouTube. Gallagher picked this up and shared it on his Twitter account.

Gallagher also invited fledgling Welsh band Cold Committee to play gigs at his Pretty Green clothing stores having heard their demo tapes. Another teenage fan, Ryan Butterworth, told NME that Liam was “genuinely the nicest man I have ever met”.

More recently, Liam even found time to wish his brother Noel a happy 50th via Twitter, despite spending much of his time online berating his sibling rival.

You might question whether ‘Rkid’ is going soft as he gets older, but these kindhearted  moments aren’t new. In the docufilm Supersonic, Liam recalls wanting fame and fortune when he was growing up as a way of helping his mum Peggy: “I wanted her to stop working three jobs, put her feet up, and get her nice things.”

Things were difficult growing up, and Liam, his mum and his two brothers fled from their violent father to escape a volatile household. Perhaps this is where a lot of the attitude has come from. A reaction to hard times.

Original Oasis drummer Tony McCarroll wrote a book detailing his ejection from the band. He put his sacking down to Noel, whom he saw as a scheming good-lad-turned-greedy, and said Liam reacted to the news very differently at the time:

“Liam seemed genuinely sorry about what had happened. He admitted Noel had told him he was going to get rid of me and he had shouted ‘whatever’ at Noel, thinking it would blow over. He then read of my exit in the paper over breakfast.”

Liam and Bonehead were the only ones to contact McCarroll after he was sacked to say they were sorry. McCarroll’s account also suggests something of a vulnerability in Liam:

“Although you might not think it, Liam had always struggled with the celebrity part of his life, and the notion that he was an idol for others. The fact that other people were more than happy to join in seemed to ruin it for him. It was almost as if success brought about a feeling of failure.”

Iain Robertson, Oasis’ ex-tour manager, wrote a book which seems to confirm Liam’s difficulties in dealing with his fame.

So perhaps the cartoon image of him isn’t so straightforward and accurate after all?

Noel may have branded Liam as rude, arrogant, intimidating and lazy, “the angriest man you’ll ever meet” and “the man with a fork in a world of soup”.

Granted, Liam may have squared up to the odd photographer and brawled with an army of West Ham fans on a ferry to Holland.

There were the drugs, the anger, the release of pure pent-up invective at baying crowds, the laser-piercing eyes and seething, strained vocals. But peel back a few layers and you realise that Liam Gallagher is true to himself, with no pretentions, a fierce loyalty and a nobility which he likely doesn’t get enough credit for.

“The Liam that I know, and his family know – he’s a polite young man. A really nice young man,” said Peggy.

But perhaps Tony McCarroll’s words illustrate it best: “Liam still holds true to those values and beliefs he started with. For all his arrogance and attitude, he has a generosity and dignity that those around him truly appreciate. He’s not perfect, but he’s honest. And he’s real.”