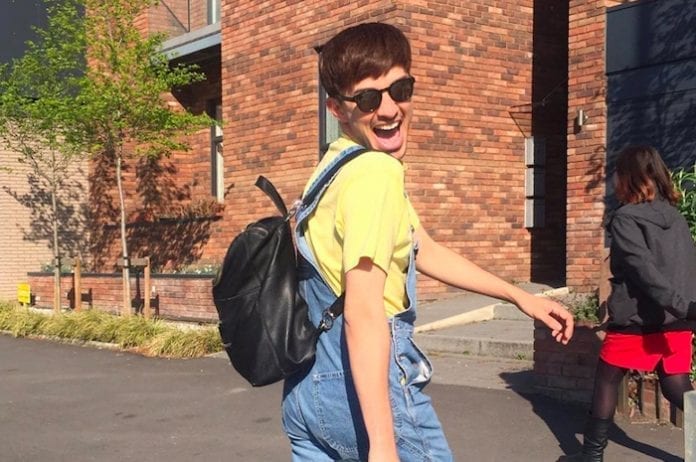 Hope Theatre Company returns to Hope Mill Theatre in May to celebrate the life of one of the victims of the Manchester Arena bombing a year ago.

Martyn Hett was a 29-year-old who loved life, pop music, and Manchester. In #Be More Martyn, his outrageous and hilarious take on popular culture is brought to life on stage, including his infamous Deirdre Barlow tattoo and the YouTube sensation that is The Audrey Roberts Noise.

The play, which was first performed at Hope Mill Theatre last year, takes us on a journey from the cobbles of Canal Street to his legendary Eurovision parties, celebrating Coronation Street, Mariah Carey and Michelle McManus along the way.

We spoke to artistic director Adam Zane to find out more.

How did Be More Martyn come about?

I didn’t know Martyn but, like thousands of others, I’d liked and shared his videos and even glimpsed his Deirdre tattoo once as my husband and I were rushing through the gay village. I have many friends who knew Martyn and it was for that reason that I found myself at his funeral, sat next to my co-producer Mike.

We were both incredibly moved by the memories shared that day, and couldn’t think of a more fitting theatrical tribute than by sharing his friends’ stories of the boy with the Deirdre tattoo. I also wanted to discover for myself what it means to ‘Be More Martyn’.

How did you get hold of the words?

Martyn’s mum Figen and his step-dad Stuart put us in touch with eight of Martyn’s closest friends, and over the course of September last year and April this year, we interviewed them individually. The interviews are then transcribed and we form them into a script to tell the story. Every word spoken by the actors on stage has been said in a real life interview.

Have there been many changes to the play since it was first staged?

After the event in October last year, which celebrated Martyn’s life with live music, films, speeches and some of these memories from his friends, we knew we wanted to continue to tell Martyn’s story. We asked the eight friends if they would be happy to be interviewed again and so lots of new stories have emerged. We can’t give too much away at the moment, but we can say there’s a 1st birthday, a ball pool and a lot of wine!

As part of our commitment to working with actors new to Hope, we have had a slight rejig of the cast. We welcome Paula Lane, best known for playing Kylie Platt in Coronation Street, along with Daniel Maley, who was recently in The Newspaper Boy at 53Two.

Why do you think Martyn was so popular online as well as with friends and family?

I think it was his ability to see the funny side of everything. He could take the smallest thing and make it seem huge. I remember the first time I watched the Audrey Roberts Noise and I was just howling. He had a real unique sense of popular culture which he shared with the world and that’s what we want to share too.

How have Martyn’s family and friends reacted to the play?

Martyn’s friends and family have been incredibly supportive of the project. They placed so much trust in Mike and I from the outset and allowed us to tell their incredible stories. They’ve been so honest and open with us.

Their reaction to the event in October was overwhelming. One of the friends said that it was like spending two more hours with Martyn, which was more than we could’ve hoped for in terms of their reaction.

The first anniversary of the awful attack is coming up. How would you say Manchester has changed?

After everything happened last year, Manchester immediately came together. The city has shown solidarity and resilience in the face of something awful. I think the fact that less than two weeks later we hosted the incredible One Love concert really does show that Manchester does things differently.

The attack itself was devastating. What does the play offer audiences, who don’t want to dwell on the event itself?

Whilst, of course, Martyn died in devastating circumstances, the play focuses on his life and lessons we can learn from the way he lived. He changed every single person he met, just by being in their lives and that’s something that audiences have told us they take away from the show. It’s also funny. We want people to laugh and enjoy the outrageous tales that Martyn’s friends tell us.

If people have never heard of Martyn, how would you persuade them to see the play?

This play isn’t a memorial – it’s a celebration, not just of Martyn’s life but of friendship. This new play explores how powerful friendship can be and encourages audiences to live life to the full, to be proud of who they are and to #BeMoreMartyn.

#BeMoreMartyn – The Boy with the Deirdre Tattoo is at Hope Mill Theatre from 21 – 26 May.