Battle of the Sunday roasts: Dukes 92 is a fine example of a great British tradition 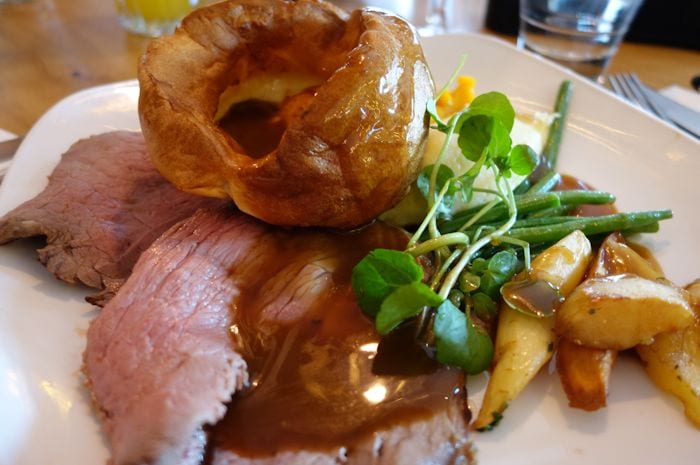 Castlefield has always been one of my favourite places to visit when the sun’s out – ideally, a long late lunch followed by drinks until the sun goes down. 2016 hasn’t been a particularly good summer, to put it mildly, so I hadn’t been there at all this year until now.

The newly refurbished Dukes 92 boasts what is without doubt Manchester’s busiest beer garden with little needed to improve this side of the operation apart from sunshine – which sadly isn’t always guaranteed in Manchester. I was therefore pleasantly surprised to find the sun shining when I visited for the latest round in our battle of the Sunday roasts.

On my last visit, the interior had definitely been looking a little tired. Following a three month refurbishment with a cool one million investment, what has changed? Quite a lot, you would hope, for that amount of dosh. And it has. The bar has been extended massively and now boasts over 50 feet of counter area, meaning less queuing and faster service – a much needed improvement as service was always an issue in the past.

The space has been stripped back to feature more exposed brick reflecting its industrial heritage (the site was a former stable block for the horses that used to pull the barges up the Rochdale Canal), and the furnishings are softer and much more comfortable. Designed by SpaceInvader, the new space is fresher and more contemporary, befitting their 25th anniversary.

The bar will always be a destination venue when the weather is good as the outside space is truly lovely and shows off Manchester at its industrial best, but when it’s throwing it down the food needs to be something just as enticing. I can’t see any major changes with the menu. Good pub grub would be my description. The wonderful sharing boards of meats, pates, potted meats, pork pies and cheeses remain.  I think these are some of the best in Manchester and are well worth a visit alone. The menu also has a whole host of jumbled headings and sections that could probably do with a re-jig and a bit of an edit. For me there are just a few too many dishes on the menu. Sometimes less is more.

We ordered bar snacks on arrival to keep us going, as we were pretty hungry from our trek from the Northern Quarter. Home-made paprika tortillas (£2) were very good- smokey, crispy, soft and light. Jalapenos sprinkled on top gave them a good kick but left the tortillas at the bottom soggy. They would have worked better on the side. 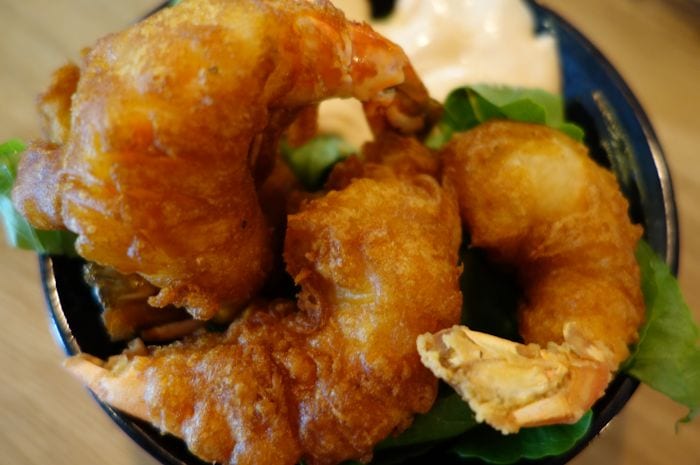 Dynamite prawns (£7) to start were just that – explosive. The biggest, juiciest tempura king prawns, well battered, knocking you sideways after dipping in the sriracha (hot chilli sauce- I looked it up!) and lemon aioli. Less successful was the baked bone marrow (£5.50) as all of the meaty flavour was completely overwhelmed by the Blue Monday blue cheese. Top points for the cheese itself though, created by Alex James from Blur and named after his favourite New Order song. 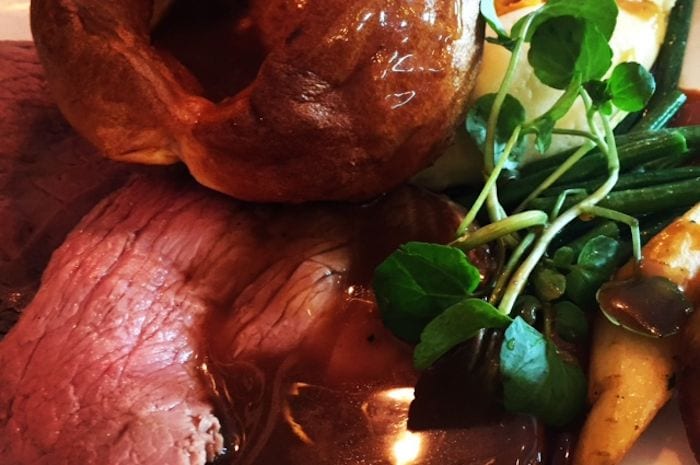 We both went with the roast rump of beef (£12.50) and we were both very happy we did! A fantastic Sunday roast comprising pink juicy beef (I would have liked mine slightly thinner but I am nit-picking), roast potatoes that were fluffy on the inside and crispy on the outside, Yorkshire pudding, creamy mash potato, buttery carrot and swede mash, maple glazed parsnips that needed another five minutes, and French beans. Washed down with lots of gravy and red wine – Argentinian Malbec Nieto (£6.15 175ml) a robust concentration of complex flavours including vanilla, plums and figs. 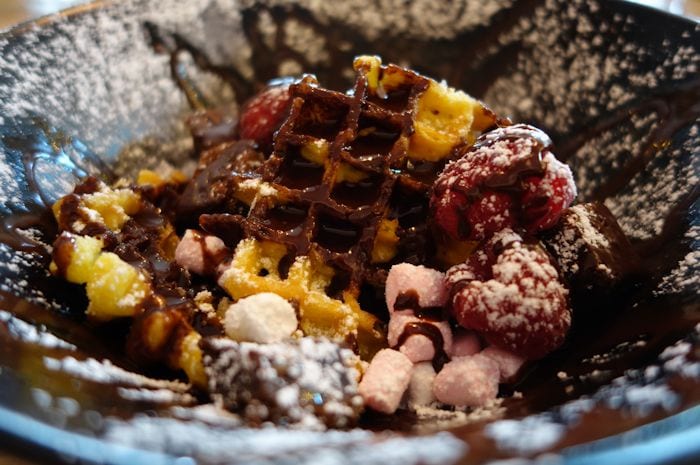 Desserts (all £6) were less successful and by this point service a little slower as the venue got busier. Waffle mess was just that bit too messy on the eye, and too sweet, with the waffle itself quite hard and overcooked. Chocolate volcano fondant was better, especially the accompanying Longridge Farm honeycomb ice-cream, although I felt overall the desserts could do with a bit more attention and a bit of refining.

We may have ended on a slightly lower note, but our overall impression was really good all round. Their roast dinner at Dukes 92 is a fine example of a great British tradition. Post refurb, Dukes is a great place to spend a Sunday afternoon, whether it’s sunny or not. The service may have slowed but to be fair on our server, his section was huge. And he never lost his smile.