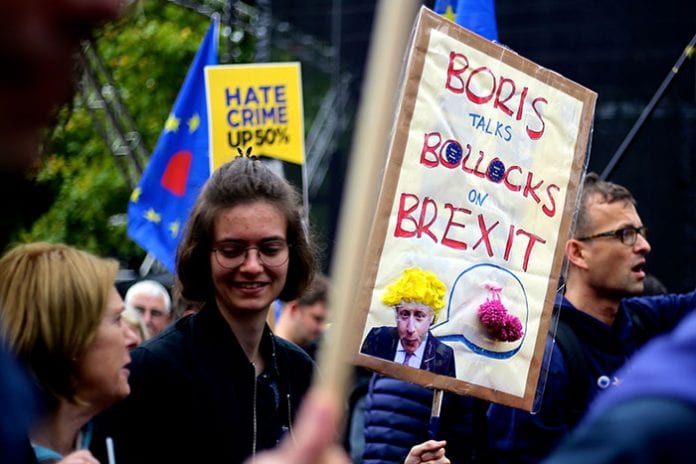 Labour leader Jeremy Corbyn has said Manchester should get ready for a general election against ‘Britain’s Trump’.

Speaking to supporters at at a packed-out rally at the Irish World Heritage Centre in Cheetham Hill last night, he accused prime minister Boris Johnson of seeking a ‘sweetheart’ trade deal with Donald Trump and revealed he would be spending the summer campaigning in preparation for a snap election.

“I would see it as a term of abuse quite honestly but he is apparently glorying in this title.”

Suggesting the trade deal would lead to the sale of the NHS to private American investors, he told supporters:

“We will do everything to protect jobs, investment, workers rights, consumer rights, environmental protections and all of the things that go with it, because at the back of it all for Johnson is a sweetheart deal with Donald Trump.

“I would see it as a term of abuse quite honestly but he is apparently glorying in this title.”

Mr Corbyn made it repeatedly clear that the party was expecting the new prime minister to call an election soon, and that Labour would be ready.

The remarks came ahead of Mr Johnson’s visit to Manchester today, where he will announce plans for a new high-speed network to connect the north first announced in 2014 by then chancellor George Osborne.

“Our job is to take Johnson and his team to task,” he said. “They want us to go off the edge of a cliff at the end of October, a no deal Brexit. We will do everything we can to stop that.”

Mr Corbyn’s appearance in Manchester followed a stop in Liverpool where he pledged to “ramp up” investment in green industries to “power up the north.”

He listed Labour policies including renationalisation of our water, power and railways, and a ‘green industrial revolution’ to tackle jobs and climate change – including a proposed £1.5bn tidal barrage in the Mersey river that could produce about 1 percent of the UK’s annual electricity needs, before revealing where he was heading next on the campaign trail.

These form part of Labour’s plans to tackle the north-south economic divide, creating 400,000 new jobs through schemes including the world’s biggest offshore wind-farm in the North Sea.