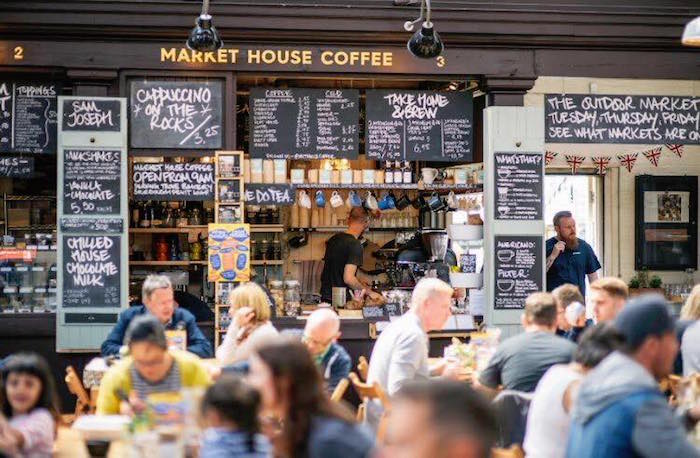 There will be no fanfare when one of the jewels in the Northern Quarter’s crown – the Mackie Mayor Market in Smithfield – finally opens its doors to Manchester’s foodies this month.

The team behind multi-award winning Altrincham Market and Market House Altrincham, plus ‘many, many talented traders, managers and staff’ are set to bring new life to the last surviving mid-Victorian building in the city’s historic former meat market.

Mackie Mayor’s Facebook page says: “You know us better than to expect a glitzy, glamour-puss launch. No PRs, no ‘A’ list, no tantalising build-up, no false promise…just you and us and some talented, passionate people who care about what they do and aim to make you happy.”

In their latest post this week, they finally name the date – but not without a dig at some members of the local media (not guilty) for jumping the gun.

Reorts of our opening this week are a tad previous! Likely softly softly open Tues 17th Oct..just so you know https://t.co/wWsZNQV0CZ pic.twitter.com/FU8ACfKt4p

“We’re nearly there though. The kitchens are all in and being commissioned this week and we’ll be in next week, 9th October,  practising making things and cleaning up after the builders with a view to a softly, softly opening Tuesday 17th October.

“We hope you’ll be patient and won’t all rush to be the ‘first’ while we find out feet. Capacity will likely be restricted to the ground floor only for the first weeks while we bed in.

“So there you have it straight from the horse’s mouth rather than the rumour mill. Very soon you’ll be able to see for yourself what we’ve all been up to.”

Such is the anticipation that one of the comments about the opening announcement suggested a queue would be forming on 16th October.

Market House in Altrincham can seat 180 people inside and currently feeds nearly 10,000 people each week. Mackie Mayor will eventually be twice that size, seating 400 people. Hopefully the quest for a seat might be a little easier, managers say.

The Mackie Mayor building was the flagship meat market for Manchester. The building is named after a Mayor of Manchester, Alderman Ivie Mackie, a businessman engaged in a horse-drawn omnibus business, who opened it in 1858.

The Grade II listed building was ‘enveloped’ (re-roofed and repaired) in a partnership between property developers MUSE and Manchester City Council. From that point on, everything has been down to Market Operations Ltd, led by Nick Johnson and Jen Thompson.

Recruiting for staff to work as part of a ‘very tight knit, hard working team’ has been ongoing for several weeks.

A spokesman said: “Ask anyone who works at Market House if you’re in doubt. We have a very low turnover of staff, we pay well, we treat people fairly and we’re probably interested in you, if you’re interested in us.

As with Market House, a strict no-bookings policy will be in operation, leaving foodie fans and visitors to ‘turn up on the spur of the moment and pitch-in.  That’s the way they like it.