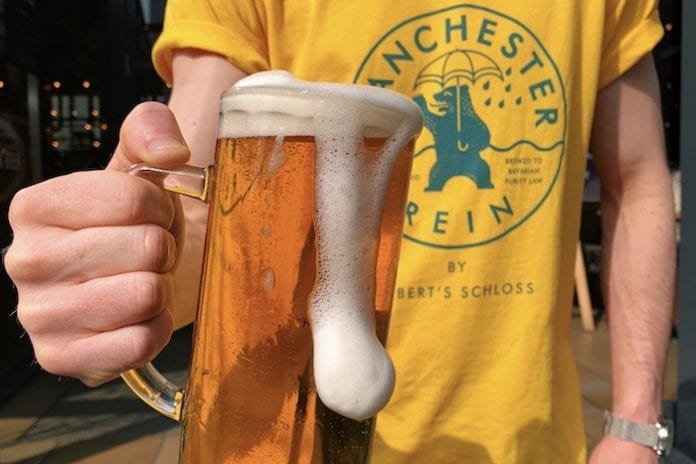 After all, every week they make a 1500 mile round trip to the Pilsner Urquell brewery in Plzeň, just outside Prague, to fill the four huge 900-pint shiny copper tanks that dominate their main bar area.

The beer must be drunk within seven days to preserve its freshness, they insist – though Manchester has no problem with that particular task.

But now, Albert’s Schloss has launched a new beer just for Manchester – a pilsner called Manchester Rein. And it’s brewed right here in the rainy city.

The fresh and unpasteurised Bavarian style pilsner, which is made in accordance with Reinheitsgebot, the German bier purity law, is made with English hops combined with traditional malt and yeast from Munich. 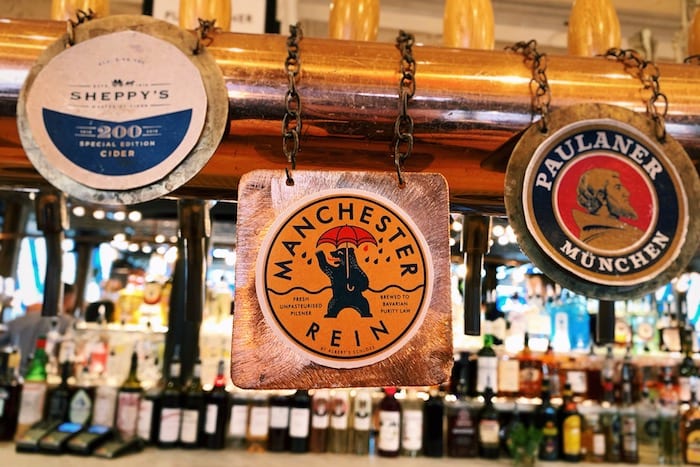 “We’ve learnt that bier is always best when it’s fresh and unpasteurised, so we decided to serve our new bier fresh for the purest possible taste,” the team at Schloss told us about their new brew.

“We’ve also learnt that Pilsner is the greatest bier in the world.

“However, we wanted to create something a little bit more sessionable so we’ve concocted a brau that sits just between a Pilsner Urquell and a Paulaner, but slightly less hoppy, boasting a peachy nose and a nutty body that’s topped off with a creamy finish!”

This marriage of Bavarian bier supremacy and Manchester passion sums up exactly what Albert’s Schloss is about, say the team – that is, the best of Manchester meets the best of Munich.

The new beer complements the bar’s wide range of beers from Germany and the Czech Republic, including Paulaner, Dortmunder Vier and Kozel on tap and Augustiner Edelstoff, Erdinger Kristall and Reisdorf Kolsch by the bottle.