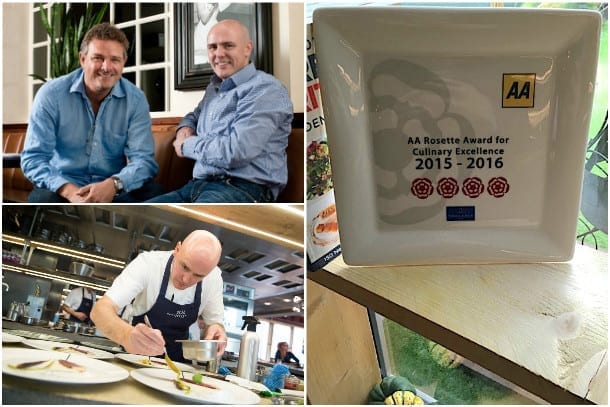 Manchester may not have a Michelin-starred restaurant but its reputation as a hotbed of culinary excellence just got even better with the award of four AA Rosettes to Manchester House.

Four rosettes are only awarded to “the top restaurants in the country where cooking demands national recognition,” according to Simon Numphud, Head of AA Hotel Services.

“The restaurants receiving the multi rosette awards should be duly proud of their achievements.”

Chef patron Aiden Byrne tweeted, “A great start to the year. Very proud of my team.”

A great start to the year. Well done to the team @MCRHouse on achieving 4 AA rosettes. THANKYOU @AAHospitality #veryproud

Manchester House is only the second Manchester restaurant to have received this accolade. The other is Simon Rogan’s The French at The Midland.

Manchester House has built a reputation for excellence since arriving on the Manchester scene in 2013. The restaurant combines fine dining traditions with understatement and discretion, and an open kitchen where Aiden Byrne and his team create a menu of modern British inspired dishes in a relaxed atmosphere. The Lounge Bar on the top floor showcases a unique 360° view over Manchester with a 15 metre floor to ceiling bar and outdoor terraces on each corner.