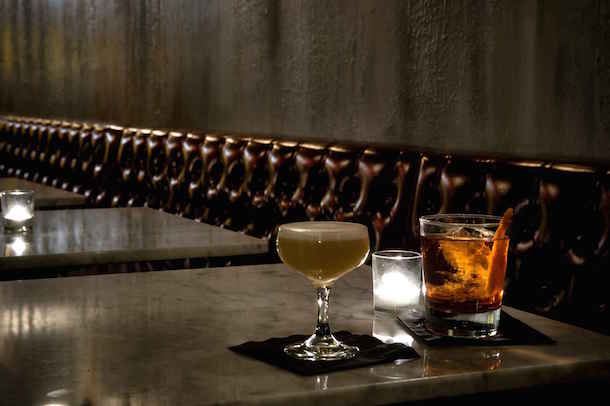 A while back, we released a feature revealing somewhat hidden and secret bars in Manchester, which went remarkably viral. Despite the list of bars falling just short of speakeasy characteristics, over 200,000 of you suggest the height of interest in secret bars.

As speakeasy reaches its apogee, we research what makes a hidden bar, or indeed a speakeasy bar, actually secret?

When is a bar not a bar?

A speakeasy is an establishment that illegally sells alcoholic beverages. Such establishments came into prominence in America during the Prohibition era in the 20s/30s.

Of course the necessity of a speakeasy is gone. The entertainment value, however, remains. Sure it’s a little gimmicky, but there’s something cool about having a few drinks in a bar not too many people know about. The secret bar makes you feel like an insider and most serve up damn good drinks.

Where’s the best place you’ve been, where your friends don’t know about?

There’s many unassuming ways to make an entrance to such establishments. It’s not just about a door with no signage. There’s one in London where you have to enter through a Smeg fridge, there’s one with a secret bookcase and another with an inconspicuous phone-booth in New York. Actual secret doors that reveal a Narnia of cocktails.

Like Fight Club, the first rule is; you don’t talk about it. And if you do, you’re barred for a while. A joint with a low capacity.

Is there a proper one in Manchester right now? There will be soon enough. Whilst you’re reading this, ninja tradesman are working on an abandoned site to transform into a classic secret bar. They’re hoping to get it polished off by the end of March.

We’ve swore blind secrecy not to tell you where it is. Well, it wouldn’t be secret if we did. But we’ll be dropping you clues throughout the opening period.

It’s probably inappropriate to say ‘watch this space’ but you get it.