You’ve probably heard of Dry January –  giving up alcohol for the first month of the year. You may even be trying it.

But have you heard of Veganuary?

It’s all about dedicating the month of January to vegan eating – so no animal products. Not a sausage. And no dairy either.

There are many reasons to try Veganuary. The love of animals is a big factor. Perhaps you want to stick to those New Year’s resolutions and eat healthier too.

According to research, 91% of the nation are now adopting a flexitarian approach to eating,  and there are so many ways you can do it in Manchester.

Whether you want a vegan meal packed with health benefits or fancy a full-on feast, there are animal-free options across the city. 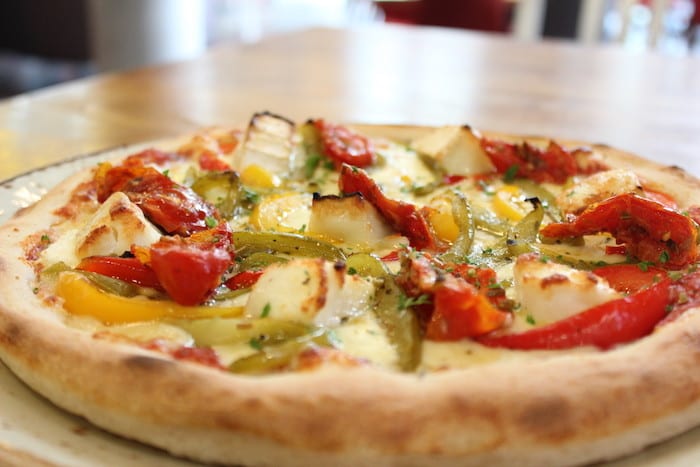 Vegan pizza! Yes, it’s a staple on the menu at Manchester’s massive arts and culture venue HOME on First Street. Simply head inside to the first floor Restaurant where they serve up an impressive roast vegetable pizza. And it doesn’t stop there. In fact, this place has an array of vegan options including cauliflower buffalo wings with spiced ginger beer batter, a brilliant portobello mushroom and bhaji burger and even vegan cheese toasties for the ultimate comfort food fix. For a healthy boost you can try the Buddha bowls – with the Asian and North African options vegan too. 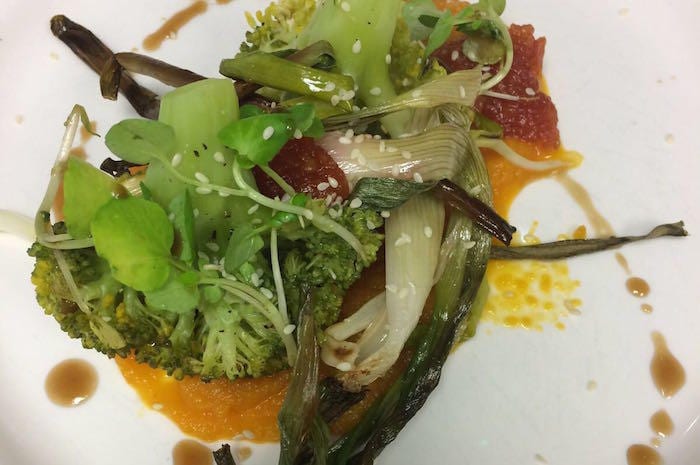 It’s junk food – but not as we know it. This pay-as-you-feel cafe on Oxford Street uses ingredients that would otherwise go to waste and transforms it into amazing dishes, with vegan options on the menu every day. The menu changes depending on what is available, but dishes have included an array of vegan soups, Aloo Gobi, an awesome parsnip and pearl barley pie plus they make some of the best roast potatoes around. Honest. Even better, there’s not just the usual opening times of 8am-3pm Monday to Friday but in January onwards you will be able to book for fine-dining slots Wednesday and Friday evenings – with vegan options available too. Previous examples of fine-dining vegan style have been dishes such as broccoli with burnt onions, smoked carrot puree, tomatoes and chili jam (pictured). 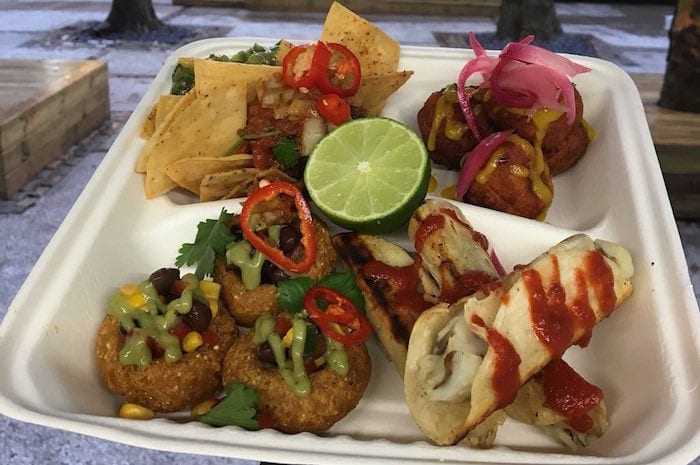 100% vegan tacos and Mexican street food is the speciality at El Marchador Tacos at Hatch, a new retail and leisure pop-up space close to MMU. Try the Norizo – homemade vegan chorizo that’s just one of the fab fillings you can have with tacos or nachos. Other options include refried beans, an amazing vegan cheese sauce and pulled jackfruit. Married together with their salsa, pickles and sauce it’s a match made in heaven. Oh, and don’t forget the guacamole. 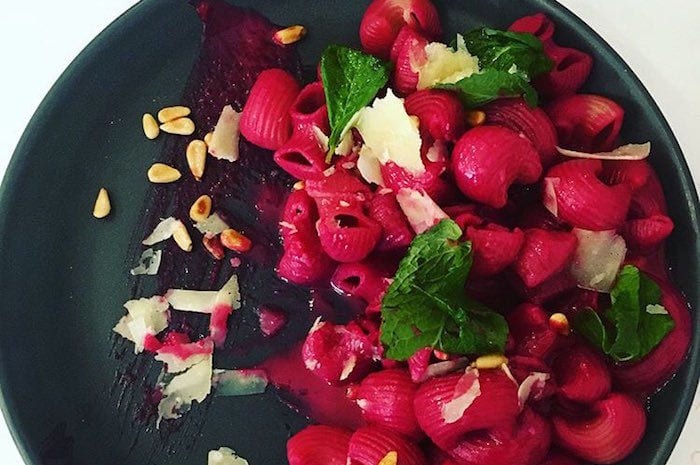 Pink pasta and chocolate ravioli are just two examples of the vegan options available at Manchester’s independent pastifico The Pasta Factory. They make their own fresh pasta, have created their own vegan cheese – it’s delicious – and feature a number of vegan options as part of a regularly changing menu. Starters include Panelle Siciliane, whilst for main the mushroom and truffle ravioli is recommended. The pink pasta is a great pick too. It’s actually called Beetroot Pipe, a pipe-shaped pasta served with pine nuts, mint and vegan cheese. Finish off with the silky and delightful chocolate ravioli. 100% delicious. 100% vegan.

The pay-per-minute comfy space and kitchen in the Northern Quarter and MediaCityUK always has an array of vegan options for you to tuck into. Ideal for a cake and a brew, the range of vegan milks will have you spoilt for choice. There are also jacket potatoes, salads, cereals – there’s something fun about eating cereal during the day – and biscuits too. Ziferblat is also a great place if you are trying out Dry January, as they offer a range of soft and hot drinks rather than alcohol. 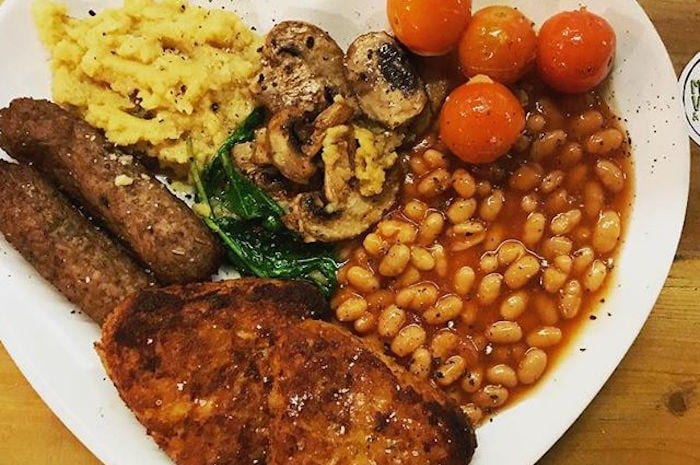 No-nonsense satisfying vegan grub for as little as £3.50 at the Manchester Vegan Centre in the Three Minute Theatre on the ground floor of Afflecks. Start with one of the fantastic vegan full English breakfasts.  And forget overpriced high street vegan options at lunchtime – this is great place to come and unwind during the day. No fuss. Enjoy vegan sandwiches, burgers, brownies and plenty more.

The 100% vegan street food event GRUB ExtraVEGANza is returning for January 2018. It takes place on Friday 27th January 5pm – 10pm, Saturday 28th January 12pm – 10pm and Sunday 12pm – 8pm at Fairfield Social Club at Mayfield, not far from Piccadilly. Feast your eyes on the range of traders including Hip Hop Chip Shop with their freshly fried vegan fish and chips, gooey mac ‘n cheese form Mac Daddies, handmade dumplings from Oh Mei Dumpling plus French patisserie from Chou Choux. And check out the array of mezze (pictured) from The Ottomen, who pride themselves on serving Middle Eastern and Mediterranean inspired eats. Fresh, healthy and seasonal too.  ‘Plant Powered Sundays’ with 100% vegan street food traders every Sunday returns on 4th February 2018.

The Victorian Chop Houses believe non-meat eaters shouldn’t be faced with the same old boring options. The vegan and vegetarian options here are good enough to tempt the most devoted carnivore. But it’s not just people on meat-free diets who suffer from dull alternatives. On a dairy-free diet? No problem. Gluten-free? No problem. 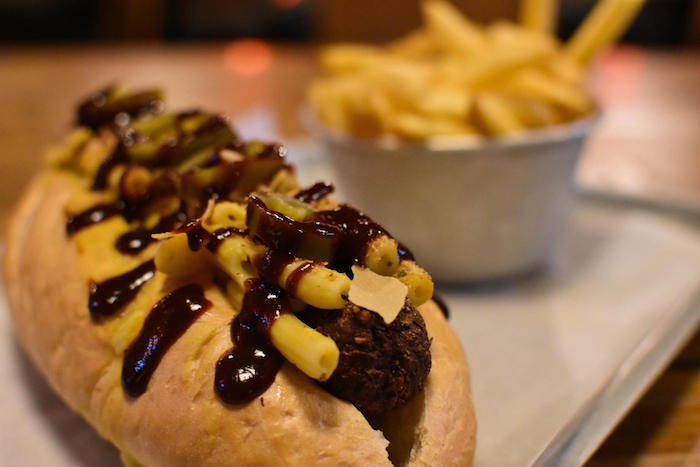 Most of the food served at this historic gig venue is vegan – from flatbread to nachos, curries to burgers – and it doesn’t miss a beat. A diabolical delight is the Holy Seitan burger – a double seitan patty, topped with aubergine bacon, burger sauce, tomato, pickles and fries. And don’t forget the sweet potato cheese. That’s right, that’s how they make the vegan cheese here. It’s lovely, especially on the vegan mac n’ cheese dog, complete with vegan bacon. Even better, there’s 50% off food throughout January Monday-Friday when you book in advance. Seems only right to have a dessert, too. After all, the chocolate brownie bowl is vegan too.

The next instalment of Cottonopolis’ monthly kitchen takeovers is dedicated to veganism. Head to this Japanese-inspired Northern Quarter restaurant on 15th January for an evening of vegan food with a unique Cottonopolis twist. Chef Joe Grant has created an impressive eight course tasting menu proving just how innovative high quality meat and dairy-free food can be. Dishes include beetroot and wasabi tacos, pulled teriyaki jackfruit bao and delicious mochi and raspberry donuts with chocolate sauce. The menu is priced at £30 per person with a minimum of two people per booking. To book your table, email.

Harvey Nichols launches its first vegan menu this month in the second floor bar and brasserie with dishes ranging from £6 – £12 plus a selection of vegan wines by the bottle and a speciality vegan cider. Choose from dishes including a curried parsnip soup with pickled apples, sultanas and coriander, followed by pumpkin hummus, marinated vegetables, olives, pickles and a warm chickpea salad. For something sweet, enjoy refreshing pineapple raviolis, with sweet chili syrup and mango sorbet or an indulgent chocolate sponge with maple-roasted banana ice cream and toasted pecan nuts. Book here.

This charming Indian-inspired eatery in the Corn Exchange is conjuring up creative delights and has a whole menu dedicated to vegans sure to make your Veganuary all the more enjoyable. The menu is mouth wateringly good, with treacle tamarind fries (so wrong but so right), the famous Mowgli chip butty, tea steeped chickpeas, homemade ice cones with watermelon sorbet and a special vegan tiffin box – a delicious meat-free food roulette. And it isn’t just a case of standard platefuls. The tapas-style presentation of dishes makes it all the better for sharing – and means you can try even more too.

Think basement bar meets the best ever curry house, and then some. It’s earned the praise of food critic Jay Rayner who thought it was special.  Nearly all the menu is vegan, with plenty of small plates you can pick and choose from. The Okra Fries are the Pringles of the street food world, utterly addictive – coated in chickpea batter and seasoned with black salt and mango powder. Bhel Puri is like a beefed-up Bombay Mix featuring samosa pastry, puffed rice, turmeric noodles, red onion and chutney. And the Biryani Bhaji Balls have to be tried to be believed.

This all-vegan diner in The Northern Quarter serves up massive, dirty dishes you’ll just want to get your teeth into. Whether you are craving a burger or just want a big bowl of mac n’ cheese, this place will give you the vegan version. It actually goes the extra mile – making the usual meat-based dishes other places serve seem measly in comparison. How about the ‘Donut have a cow, man!’ burger – two ‘beefy’ patties, two lots of ‘cheez’, plenty of ‘baecon’, crispy fried onions and BBQ sauce sandwiched inside a donut bun. There are also ‘Chkn’ burgers, whopping sandwiches with names like the Manc-inspired ‘Soy Division’ and don’t forget the frickles – fried pickles. Naughty. And nice.