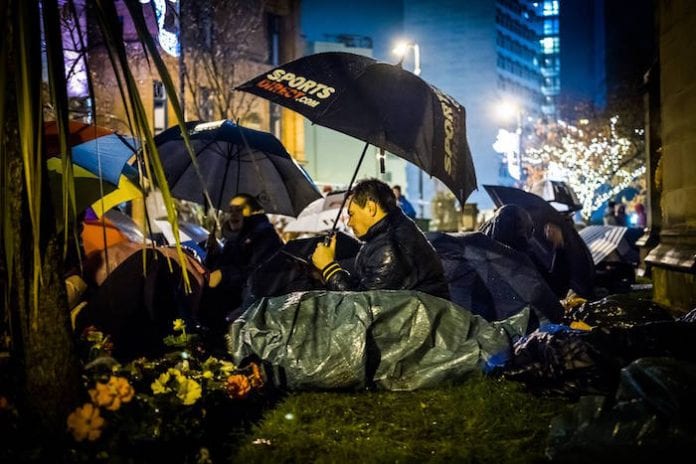 You’re walking down Market Street, shopping bags full of Christmas gifts, and you spot someone in a damp sleeping bag with a half-empty cup of coppers.

It’s an image that’s all too familiar in Manchester. But in an increasingly cashless society, it’s rare we find ourselves with a pocketful of change to do a good deed.

Last year, there was a 41% rise in rough sleepers across Greater Manchester last year, and homelessness charity Shelter recently revealed that in the run up to Christmas they received a call for help every four minutes.  This year could be even worse.

If you’re looking for a way to help the homeless this festive season that doesn’t require a pocketful of loose change and you haven’t got time to volunteer, here’s how you can help.

New to Manchester, The Dealer is an app available to both iPhone and Android users with hundreds of money-off deals across the city in places like PLY, Foundation Coffee House and Black Dog Ballroom. Just choose a deal in the app and turn up at your chosen spot, be wined and dined and receive a big discount off your final bill. In return, you’ll be prompted to donate a fraction of what you’ve saved to Manchester homeless charity Mustard Tree. 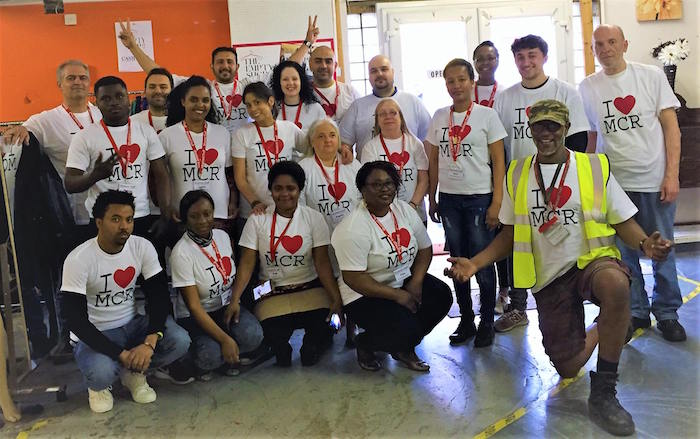 Like The Dealer, EasyFundraising is an app that donates money to charity. But rather than offering deals, EasyFundraising allows you to donate money when you shop – and it actually doesn’t cost you. Instead, big companies like Tesco are connected to the app and they’ll give a commission to whatever charity you choose.

A really simple way to keep both you and someone else warm this winter. Next time you’re catching up with a friend over coffee or grabbing a latte to help you through your Christmas shopping, think about paying for a second one to be collected later by a homeless person. Places like the Nexus Art Café in the Northern Quarter, The Anchor by the Curry Mile and various Starbucks around the city run suspended coffee schemes, so they’re definitely worth a visit next time you’re in town and need a caffeine hit.

The pre-Christmas-clutter-clear-out is fast approaching so we can fill our homes with shiny new goods. But before you head to Gumtree, Freecycle or even Facebook to flog your old belongings, have a look on Street Support to see what homeless charities in Manchester need – maybe you could pass on your old belongings to them instead. You can donate pretty much anything. If you’ve asked Santa for a new pair of boots or even a shiny new fridge and you’re getting rid of your old ones, check the website for specific charity needs and pass on your what you no longer want someone who really needs it.

StreetSmart is a national campaign in a number of Manchester restaurants that adds £1 to your restaurant bill and donates the spare change to homeless charities. Dining at places which are members of the scheme like Grafene and Don Giovanni before the New Year will support Manchester homeless charities such as Barnabus and The Booth Centre.

Whether you fancy yourself as the next Nigella or your local curry house will do, Dinner4Good is an initiative advocating dinner parties for a good cause. All you have to do  is host a festive dinner party for your friends and family and sign up online so your guests can donate their preferred amount. Once you’re suitably fed and watered, Dinner4Good will do the rest and hand over the donations to the charity of our choice.

A stroll down Oxford Street will lead you to the little gem that is the Real Junk Food Project. The café cooks with surplus food to eliminate food waste and the Pay-As-You-Feel concept means there are no extortionate prices here, making it worth buying a brew or two here for someone on the street.

Away in a Pret A Manger

Your donations at Pret A Manger help deliver food to the homeless throughout the night. A team made up of volunteers arrive at the end of each day (or at least a few times a week) to collect the day’s unsold food and then delivers it to hostels and charities supporting the homeless. This huge effort ensures as much of Pret’s unsold food as possible is given to people who really need it instead of ending up in the bin. All of this is possible thanks to the year-round donations from customers and 10p from each soup sold. Plus, this Christmas, 50p will be donated from every Christmas Lunch they sell.

It may only be November but let’s be honest, it’s becoming a bit of struggle getting out of bed in the morning to make a packed lunch. To reclaim your lunchtime and do your bit to help, why not grab a butty from the M&S Festive Collection. It funds Shelter’s swamped helpline throughout the festive season.