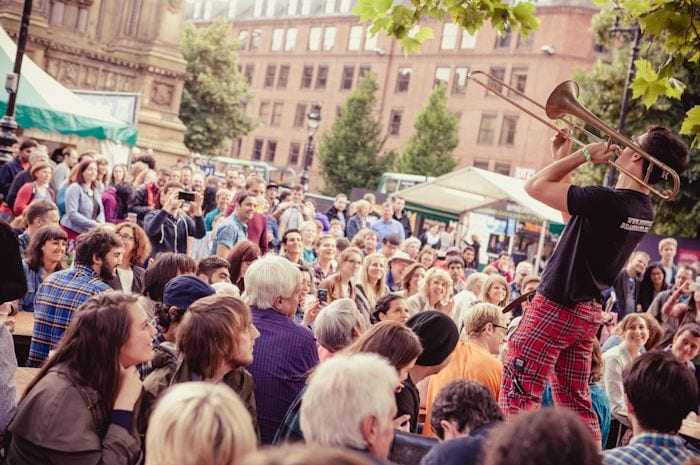 The 21st Manchester Jazz Festival is now in full swing and lasts until July 31. It’s a 10 day spectacular of jazz acts playing across the city and is already impressing audiences with performers such as Tony Wilson’s Second Liners – a tribute to Manchester’s Hacienda era through jazz music. The main site is The Hobgoblin Festival Square in Albert Square, next to the Town Hall – a specially designated area with a stage and street food with more events  taking place across the city.

The focus of this year’s Festival is to encourage you to rethink jazz. Many events are free and you are encouraged to explore, across 82 gigs, 550 artists from all over the world and nine iconic venues including Band on The Wall, Northern Quarter favourite Matt & Phred’s, the historic Portico Library, RNCM and, for the first time this year, HOME.

Antonio Sanchez & Migration Band
Cinematic and spectacular jazz from Antonio Sanchez, a 4-time Grammy Award Winner known for his work on the recent film Birdman. This is expected to be a treat for the senses, with the Band on The Wall a perfect venue for sound quality. Band on the Wall, Tue 26th

Irwin Mitchell mjf originals 2016 – Ben Cottrell – New Seeing
You are invited to the World Premiere of New Seeing, a specially commissioned piece inspired by the Stan Getz album Focus, featuring a trumpet, twelve-piece string ensemble and double rhythm section. It is set to be an impressive sound, performed by a Manchester supergroup with players from Manchester Camerata, The Hallé, BBC Philharmonic and RNCM. Created by Ben Cottrell, Beats and Pieces composer, you can expect exciting jazz with something for everyone. RNCM Wednesday, July 27

Kit Downes & Tom Challenger – Vyamanikal
An exclusive late-night concert inside the iconic St Ann’s Church featuring live saxophone paired inventively with the Church’s own organ – and an impressive visual display, too. One to attend if you are looking for a truly unique evening. 10pm St Ann’s Church Thursday July 28

Atom String Quartet
Perfectly named  in view of Manchester’s status as European City of Science 2016, this impressive ensemble from Poland are out to prove that strings, not just saxophones, can be jazzy, too! With this string quartet you can certainly enjoy experimental, exciting sounds! St Ann’s Church, Thursday July 28

What Happens In Our Brains When We Improvise?
Also tying in nicely with the European City of Science celebrations is this interactive collaboration and debate between scientists and musicians featuring Dr Graeme Wilson, Adam Fairhall and Tom Ward. It combines performances with an exploration of what happens to our brain chemistry when we are creative with music. Enjoy the truly historic venue of the Grade II listed 1806 Portico Library. Friday July 29

Jazz on Film season at HOME
This year’s Festival doesn’t just feature music but some fantastic films, too! Running until Sunday 31 July, the cinema at HOME is showing a series of jazz-inspired classics including Round Midnight, Bird and Tubby Hayes. There will also be an exclusive chance to see the iconic film A Man in a Hurry introduced by the producer and writer, Mark Baxter.

For all the latest news, tickets and booking information and the mjf 2016 Soundcloud playlist visit www.manchesterjazz.com.  Follow the Festival at facebook.com/manchesterjazzfestival or on Twitter @ManJazzFest

Read More »
September 28, 2020
PrevHave you read?If Alan Partridge was a Manchester restaurant critic…
Next read...Manchester chefs and restaurateurs put on their walking boots for Action Against HungerNext