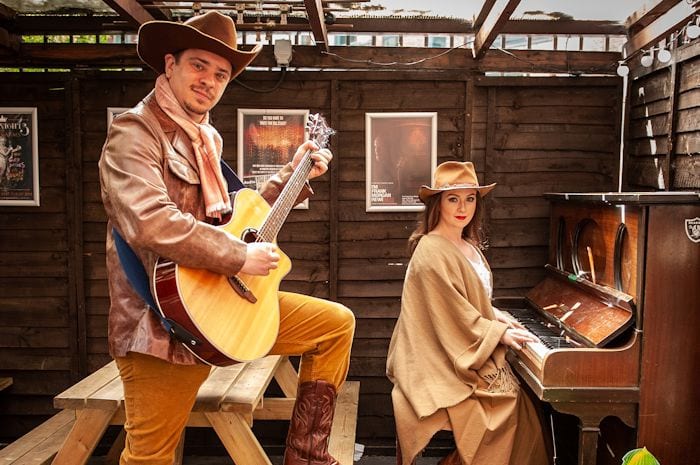 The Manchester International Festival takes place every two years. There isn’t one this year. But there is a Greater Manchester Fringe. We do things differently here.

With over 100 events taking place at venues across the region, ranging from the serious to the surreal via the downright wacky, there’s bound to be something to tickle your fancy.

Here’s a selection of some of the wackier sounding shows, in no particular order. They’re not necessarily the best shows. We just like the sound of them.

Come ‘ere you Daft Cow explores female friendships, mental health, crappy sexual encounters and the fact everything can be solved with pizza and margaritas. Winner of this year’s I Love MCR Award for Show with the Best Title at the Greater Manchester Fringe.

Blackpool, What a Shit Place to Die

Billy Costello is a young, gay, depressed, autistic actor with a drug problem. He is a man on the brink. It’s 5am. The sea is slowly rising up his body. The lights have just gone out on Blackpool Prom behind him. Billy looks back on his life and laughs at the tragedies and cries at the happy times. Is this it?  Runner-up, I Love MCR Award for Show with the Best Title at this year’s Greater Manchester Fringe.

HG Wells, Caesar, Nostradamus, Wordsworth, Sid Vicious, and many more are all brought together courtesy of Percy and his time travelling wheelchair. May contain nuts and foul language.

Confessions of a WordPress Fanatic

Got WordPress? Evert forgotten your password? Uploaded images the wrong size?
Is there a nasty widget in your footer? Do you suffer from unresponsive design?
An hour of niche comedy about the world’s most popular online software web app thing.

Enjoy a night out in the gay village at a fraction of the cost as you follow the escapades of a group of queer women on a night out. Featuring drunken pep talks, a cat fight in the toilets, and a feverish search for Lindy’s friends (who may or may not be imaginary).

Save money on expensive theatre productions by watching Garry Starr perform every single genre of theatre in under 60 minutes following his recent dismissal from the Royal Shakespeare Company due to ‘artistic differences’.

Part kitchen table drama, part B-movie horror. The show follows the life of a young woman – Janet – who constantly tries to abscond from her destiny in the oven and follow her dreams against all odds. Members of the cast are represented by a 1950s milk churn, a packet of French flour and a rather handsome rolling pin. Janet is portrayed by 1.5 kg of uncooked bread dough. Probably a better actor than Emma Watson.

We all know deep down that Shakespeare can be, well, a little bit boring. Shakespeare’s classic tale of young star crossed lovers is made less boring by the Rubbish Shakespeare Company. Ideal for the whole family (4+).

Thermos flasks displayed in such a way so as to stun the audience plus a surreal commentary from your confused tour guide.

One Man Bond: Every Bond Film In 60 Minutes

Save money on expensive James Bond box sets. Watch Brian Gorman play over 200 characters in one hour, including every James Bond from Sean Connery to Daniel Craig plus M, Moneypenny, Q, and the infamous villains Dr No, Goldfinger, Blofeld, Mr Big, Scaramanga, Jaws, and Raul Silva.

A Yorkshire love story. Life seems pretty much sorted for Phil (job, partner and coach holidays) and Mark (girlfriend, potholing and zombie films). Time may be ticking but it’s a tick easily ignored. Their chance meeting raises some tough questions about the choices they’ve made. Dare they face their own personal Zombie Apocalypse?

When you’re disabled and unlucky in love, the thing you know the best is falling – in and out of cars, off chairs, and in and out of love. Join John Porter on an epic journey from Chorley to Cheadle, Blackley to Bulgaria, and Saltburn to Salford, as he talks through just about everything. Why does he hate the Courteeners and just why he can’t help falling in love?

The Little Pink Book of Masculinity

Come and see John strip, dance and crack jokes all in the name of saving masculinity! Whether you’re in need of help to becoming a real man, or your masculine ego just needs a gentle rub, then this show is a must-see.

A Dance in the Dark

It’s decision time for Gerald – to get up and get out into the world and face his blind date or not to bother and eat another pizza?

Not the Katy Perry. This Kate Perry is an actress, radio presenter and writer from Dungannon, Co. Tyrone and she’s presenting a happy hour of comic monologues featuring a can of WD40, a pair of goggles and a rubber hat.

Marlon Solomon is Jewish. This didn’t bother him much until he discovered that some people he knew didn’t believe the Holocaust happened. From 9/11 to shape-shifting lizards and Holocaust denial, this is a darkly comic tale of one man’s journey through the conspiracy underworld.

Four storytellers wearing western outfits sourced from charity shops and eBay tell the ultimate Wild West story in the car park of 53two with a live sound track of original country & western songs. Members of the audience who turn up in Western outfits get a prize.

A musical about rubber. The Black Stuff tells the dark true story of how a bankrupt button-maker became one of the most important inventors of all time – and the terrible price he and his family paid for it. Featuring eleven songs, 69 rubber ducks and one condom gag.