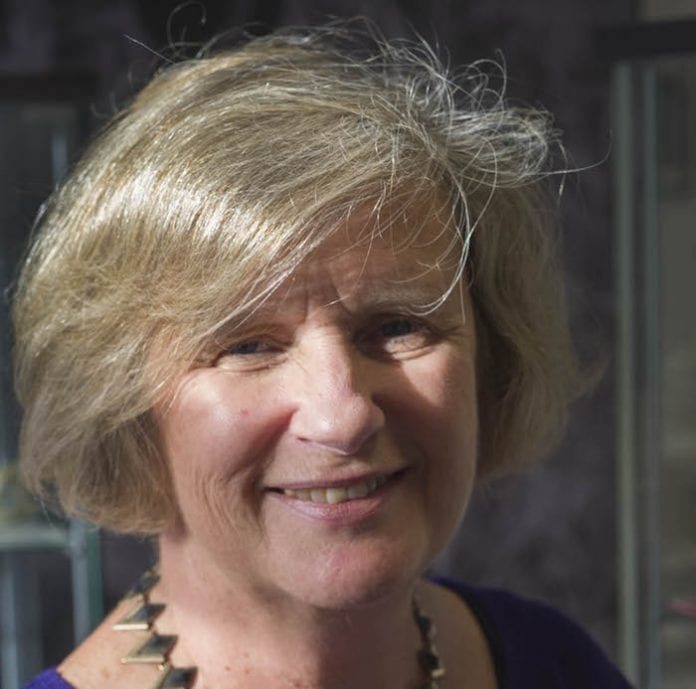 Twenty years ago, Diana, Princess of Wales walked next to a minefield in Angola, drawing the public’s attention to the effect of unexploded landmines and bombs on some of the world’s poorest people.

More recently, Prince Harry called on the international community to make a renewed commitment to clear these indiscriminate killers and make a world free from landmines a reality.

Derbyshire-born Dr Jane Cocking OBE has been chief executive of the Mines Advisory Group (MAG), whose UK headquarters are in Manchester, since January 2017.

She studied as an undergraduate and postgraduate at the University of Manchester and  brings more than 25 years’ experience in the international humanitarian and development sector to the job, having lived and worked in East Africa, the Balkans and southern Africa for many years.

MAG has helped more than 17.7 million people in conflict-affected communities in over 40 countries since 1989, giving them greater safety and the opportunity to rebuild their lives, livelihoods and futures.

By removing unexploded landmines and destroying them, they enable communities to grow food and make a better living, access health services, and know that their children can walk to school in safety.

“In essence, MAG is still about people on the ground, but we have also campaigned, lobbied and advocated for people who are responsible for dealing with unexploded remnants of war, to really make sure the problem as a whole is tackled,” she says.

MAG became a co-founder of the International Campaign to Ban Landmines, and that work led to the Ottawa Convention.

I’ve felt passionately since I was a teenager that it is wrong that some people in the world are lucky enough to have the opportunities, care and resources that we do, while others don’t. That’s what originally drew me into development and humanitarian work.

I visited Somalia in the early 1990s during the worst of the famine and felt so passionately that it was important we offered what we could to people who find themselves in those unacceptable circumstances. I was determined that it was going to affect my life.

The people I meet when I work, live or travel to places where humanitarian crises have happened or are happening. I know from each of my visits there will be one or two people who really stick in my mind. The grandmother in Zimbabwe who was bringing up nearly 20 grandchildren and great grandchildren on her own because her sons and daughters had died. The women in Syria running their own schools and support networks. People in South Sudan.

I remember meeting one woman who had walked heavily pregnant with her family from the place they left to the place where they sought shelter because of the conflict, and remember the determination and commitment, but also the good humour she still had. How can you not be impressed? They are doing things that I know would finish me off.

I’m sure everybody says there is no such thing. A typical day in Manchester is working to hire the right people, making sure we’ve got the right business systems in place and we connect with people locally.

A typical day with the program teams in Iraq could be going to villages where people are returning after fleeing from the conflict with IS, and talking to people who are waiting to go back into their houses but can’t because of the appalling improvised landmines. That’s a very different typical day.

A couple of weeks ago I was in Chad launching a new project to clear landmines in the north-west of the country, and I had to give a speech in French to government officials. Next week I will be in Washington talking to our donors and partner organisations.

I love to bake and I love to walk, particularly in the Peak District. I’ve been a Border Collie owner for a long time and they always need exercise. And I love sailing, and the freedom it gives you.

Am I allowed two pieces? They’re both African proverbs. One is: ‘Never judge anyone until you have walked a mile in their shoes’. The other is: ‘If you want to go fast, go alone; if you want to go far, go together’.

I have a PhD in Cretan textiles. Which believe it or not is strangely relevant and helpful, but it’s probably not something you’d expect.

I will say neither, but it’s because I have reason to love both. Blue because when I first lived in Manchester as a student I lived near Maine Road and could hear it from my bedroom window. But Red because Sir Bobby Charlton is such a big supporter of landmine action and we work closely with his charity.

Affleck’s Palace. I remember when it was a basement in Lever Street when I was 18, and the best skirt I’ve ever owned came from there. I wore it until it fell apart. And now the ice cream there is the best in the world.

Central Library, because of the feeling of calm and learning and peacefulness in the reading room. I still go and sit there when I’ve got documents to write and it gives me a sense of calm.

And this might sound unbelievably tacky, but Piccadilly Station. When I came for my university interview and sat in the station waiting for my train home, that’s where I first felt Manchester was the kind of place I could be at home in. I wanted to come back.

It has to be the weather. I would love it to be a bit sunnier. But I do realise that Manchester would not be here if it wasn’t for the weather, because that’s why the cotton mills were here.

I love the robust humanitarian spirit. What I really recognised when I came back at the beginning of this year was that people on buses and trains are just funnier than they are anywhere else, and so open and helpful. It makes you feel really welcome.

The UK Government will match every pound donated to MAG’s Walk Without Fear appeal, supporting work in countries affected by conflict and helping more families to walk without fear. Find out more here.