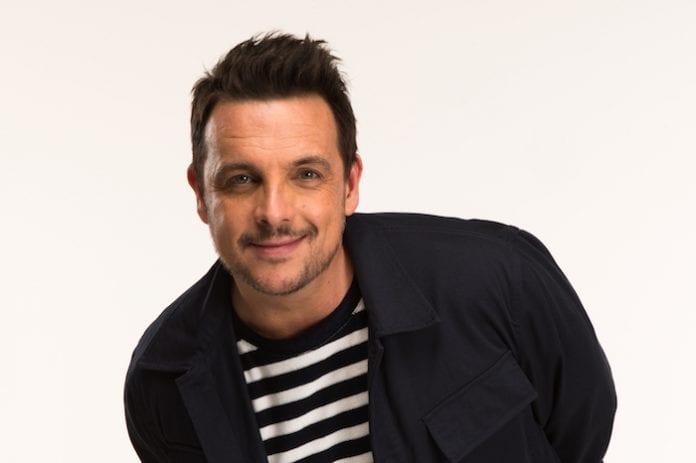 If you’re lucky enough to have lived in Manchester over the past 20 years, chances are you’ve tuned into Mike Toolan during your morning commute to work. Since 1998, Toolan has been broadcasting live across Key103’s airwaves, best known for hosting the coveted 6am – 10am breakfast show slot.

From welcoming United back at the 1999 Treble homecoming at the Manchester Arena, to meeting famous faces from the likes of pop sensation Taylor Swift to footballing legend David Beckham, the presenter has a wealth of experience on his CV.

He not only presents on the radio but also has a number of TV appearances to his credit, including presenting on the famous ITV This Morning sofa alongside Eamon and Ruth, as well as hosting the Channel 5 Saturday sports show Turnstyle – amongst others.

Just last month, the former Key103 radio station went through some huge changes, which saw history made as it was transformed into Hits Radio, the first ever national radio station to broadcast from Manchester.

After hosting the breakfast show for over 14 years, he decided it was time for a lie-in, and now hosts the slightly later slot of 10am – 1pm weekdays and Saturday mornings from 9am.

What first got you started in radio presenting?

I have always been interested in radio since I was a small kid. I actually started on a radio station in America called Yes97 whilst having a gap year touring around America when I was 18. They loved the English accent, so I couldn’t fail.

So many to choose – as a kid I loved Chris Tarrant on Capital FM and Simon Mayo on Radio One. But for me, the master will always be Sir Terry.  He had a natural warmth and self-deprecation that inspired me to do the same.

Hosting the Man United Treble homecoming event at the Arena in May 1999. There was an audience of 20,000 there and it was (as I found out on the day) streamed live on ITV, Sky news, Sky Sports and BBC 5 Live. As a United fan, bringing the team back to Manchester at such a momentous time was such an honour for me.

What does a typical day at the studio involve?

I arrive at 8:45 and have a quick shower at work (I go to the gym every morning) and then sit down with my producer James and we talk through the day’s show. We always have a whole stack of ideas and so have to filter through which ones would work best. Then at 10, we are on. Generally I then leave at 1:30 after a quick meeting and do any remaining work at home in the afternoon – usually in the back garden. And very often I may forget the work and just nap.

How do you feel about Key 103’s re-brand to Hits Radio and the station going national?

It’s a massive honour for me to be part of. I’d always dreamed of being on a national station but didn’t want to uproot the family and move to London. And now a national pop station is coming out of Manchester and I’m on it. As well as it being on Hits Radio, my show also goes out across 13 FM stations from Birmingham to Scotland, so the audience is quite large.

Tell us about your new presenting slot

I do a Timehop feature at 10, where we play some throwback tunes and invite the listeners to phone in with their memories of that year. Then at 12:30 every lunchtime, we give listeners the chance to win £5,000 on our music quiz 5 Seconds to Think.

I have 2 kids who keep me pretty damn busy with football, netball, tennis etc. I also love drumming and enjoy a good jamming session whenever I can. Apart from that I am lucky to have some really great friends in Manchester who are terrific characters and a constant source of entertainment. Alcohol may come into it somewhere along the line.

Who is the most famous person you’ve interviewed and what were they like?

Probably Beckham. He used to listen to Key103 when I first started in 1998 and he would regularly call the show and we built up a really good rapport. I’ve even been out on the beers with him. Oddly enough, he actually drinks Becks. He’s an absolute gentleman.  I still see him occasionally and he’s still as normal as a milkman.

If things hadn’t worked out in radio, what else could you have seen yourself doing?

I’d have been a priest.

I was an extra in The Godfather 3 – a crowd scene in New York, with Andy Garcia.

Everything. The people, the fierce loyalty towards the city, the sense of humour, the football, the bar and restaurant scene, the Northern Quarter, Corrie and of course, Sir Alex.

Listen to Mike Toolan on Hits Radio 10am-1pm weekdays and Saturday mornings at 9am www.hitsradio.co.uk