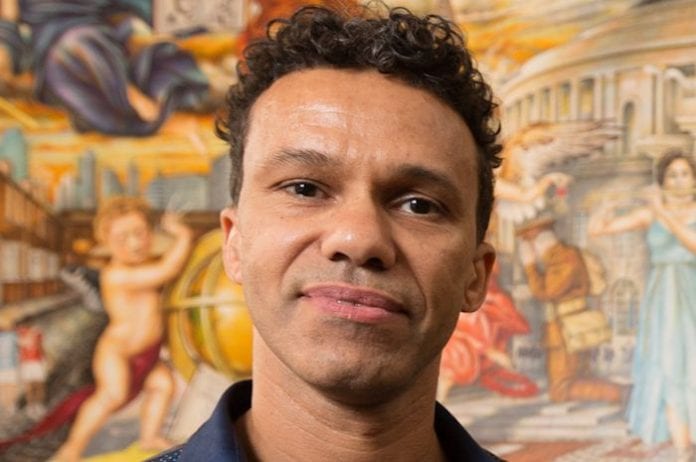 I met Michael J Browne at Manchester Art Gallery at his request. A gentle, observant and thoughtful man, he talked carefully about his life and career and revealed a little more of himself with each question.

He was born and grew up in Moss Side. Brought up in a single parent family, his mother was often out working to provide for him and his brother who has mental health issues. When she was at home she would drink and his childhood was challenging and lonely. He spent a lot of time on his own and this is when he started to draw and create things to escape his world. He left home at an early age and went to live with his art teacher who helped nurture his skills and develop his ability through adversity. He went on to study at Chelsea School of Art followed by an MA at Manchester Metropolitan University.

He held his first exhibition at the age of 19 at the former Ginnel Art Gallery on Lloyd Street. In these black and white drawings there was no colour, reflecting his dark background. He took a technical drawing course and studied the work of the Renaissance masters and, veering away from conceptual art, gradually introduced narrative, culture, history, religion, and even colour.

In 2001, his best known painting The Art of the Game, depicting Eric Cantona as Jesus, was displayed in The National Portrait Museum in a collection of 101 portraits.  He appeared in the BBC documentary Made In England which featured a painting set in Wordsworth’s garden and examined the ideas of being English and identity in the country today.

More recently, his £50 note pencil drawing of Wayne Rooney coincided with the United captain’s testimonial and was on display in the National Football Museum.

I’ve been drawing all my life, from the very early age of 4 or 5. With my Mum at work I was often left to my own devices, I drew anything I saw around me, what was on the TV, what I read in books. I started by being very creative on my own.

What is around me influences me more than anything, but also cultural icons with a diversity of backgrounds. Great artists from the past, Picasso and Van Gogh, how they changed the way people look at art. Martin Luther King and the civil rights movement. And today Eric Cantona, although I don’t like footballers for their celebrity status, I don’t consider that interesting.

Having my work exhibited in the National Portrait Gallery alongside great artists I admire was a real honour. And also when Pavarotti came to Manchester and admired my copy of the Sistine Chapel ceiling painted in Cocotoo Restaurant.

I walk a lot. I’m a strong observer, architecture, nature, people. I gather ideas in my notebook, on my phone. The paintings are the labour after the concept, anything from two to ten hours painting.

My head is always ticking over. As an artist I don’t really have days off. I used to play a bit of football and dance the Zouk-Lambada though.

In society there is now so much choice that values have become more shallow and greed is rising, resulting in less love, less respect and less intellect. What I’m trying to say is people need to spend more time thinking about things and realise their actions have consequences.

Maybe a technical draftsman. My teacher said I was one of the best.

Over the last couple of years I have spent a lot of time in Italy tying up my thoughts with religion and environmentalism. This has led to me creating ethical stories for children or even adults. The significance is the same, with morals behind the stories. But also hopes and dreams, whatever your background.

Manchester Art Gallery where we are now. I often come here. I like what Old Trafford is doing for the city although I don’t often go. And empty parks or empty churches when I can find them, feeling the energy of the surroundings, alone with my thoughts.

For people here to be more aware, less blinkered and self-interested, always looking for the next party. To be a bit less greedy. We’ve been an accepting city with the door open for so long. Don’t shut the door now.

I like that I can trace my history in Manchester. The energy is much more cosmopolitan now and it’s more diverse, but my roots are here.

Michael is currently working on a project called Local Heroes with young players at Manchester United. He is also developing ideas for children’s books – perhaps helping them escape their reality,  just as he did?