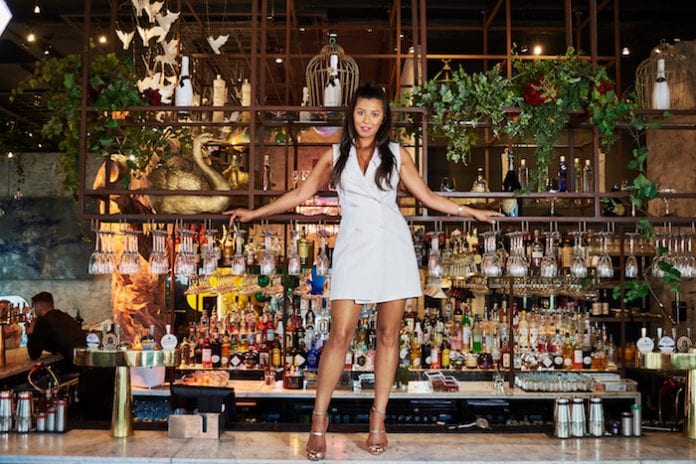 Karina Jadhav has firmly cemented herself and her business as front runners on Manchester’s thriving hospitality scene.

The co-founder and creator of Neighbourhood, Victor’s Hale and Southern Eleven, Karina ditched a career as a journalist to create something of her own.

Having started out with no prior business training, she has gone from running a stall at Manchester’s Food and Drink festival to creating her one of a kind, immersive dining experience, Menagerie. in just nine short years.

And after just two years of operation, the business savvy entrepreneur is looking to expand the Menagerie brand to a second site.

I used to work as a journalist and my ex-partner worked for supermarket chains. He decided he’d had enough and wanted to set up his own concept. We didn’t have any experience, so we started small with food and drink festivals. We did Manchester Food & Drink Festival. We basically had a 3×3 metre stall that we did American BBQ on. We then got a food truck and opened up in the Arndale food court shortly after. From the success of that, we opened a full-service restaurant in Spinningfields. That was really the beginning of me learning about the restaurant industry and how it all works.

I’ve always been really heavily influenced by what’s going on in the US and Europe. The vibrant dining concept that I have now – which I think is still very unique in terms of how it operates as a business – has come from New York and The One Group, so the likes of STK and Bagatelle when it was a new concept in 2010/2011 offering brunch clubs which you just didn’t see anywhere else. Good quality food, service and atmosphere – that’s all a given, it’s not even a question. And then beyond that is where the point of difference comes and they stand out. In terms of Manchester, Tim Bacon who created Living Ventures had a huge influence on me.

Getting through the first two years with Menagerie and standing my ground with my own ideas and sticking to what I thought was right for the business. There have been so many people telling me not to do things and criticising my choices. It’s easy to buckle under that pressure, it can be terrifying. That, and managing to play over 60+ people’s wages every two weeks.

Every single day is completely different – it depends what time of year it is and what’s going on. The main thing that I do every day that gives me sanity is my daily book keeping. Managing the cashflow, looking at where we are and checking we’ve managed to reconcile all the sales. That’s the business side of it. And I do loads of creative stuff. We’re working on Halloween at the moment – event specific cocktails, performers, costumes, dressing the venue etc. We’ve already planned what’s happening at Christmas. We’re just pulling everything together for Boxing Day and New Year’s Eve. Going into 2019, we’re looking at expanding the business as well. We’re looking at a second venue in a different area but I can’t say where yet as it’s not officially yet but that might be happening before Christmas.

Nap. I don’t think there is such a thing as a day off when you run a business. Everybody always says, ‘you go on holiday all the time’ and it’s like, yeah, but I’m constantly on my phone working. I’ll get on a sun lounger for two minutes then I have to get up because I can’t see my phone properly. I’m not very good at relaxing, but I am very good at napping.

Confidence is the biggest corporate aphrodisiac. You really have to believe and have confidence in what you’re doing. You’re on the island – burn the boats and commit to it. You’ve got to really commit and believe in it. Put your head above the parapet and stick to it.

There’re loads of things that I wanted to do. I wanted to be a broadcast journalist but I was too scared to do that. I didn’t have the confidence. I used to work in radio as a freelancer. I worked at Granada Reports and I really wanted to be a journalist. I couldn’t see myself doing something that’s not creative now. I just love the creative – that’s my thing.

I’m a bit of a witchy-woo. I do fortune cards and read cards for my friends. I’m quite spiritual and I’d probably classify myself as a pagan if I was going to classily myself as anything. I’m not religious but I’m very much into crystals, reiki, healing and all that sort of thing.

Definitely Menagerie – I pretty much live here. I love Wings – that’s where I go if I want a meal and to sit quietly and actually talk to the person that I’m with. I love the food, I love Mr Wing and the service is just gorgeous. And I love Evuna on Deansgate. The paprika chicken is amazing.

It’s one of the most vibrant places in the UK. It’s definitely our second city. I love that we’ve got two amazing football clubs. We’ve got the best food and drink offerings outside London by far. I think we’re just completely ahead of the game in comparison to the rest of the country.