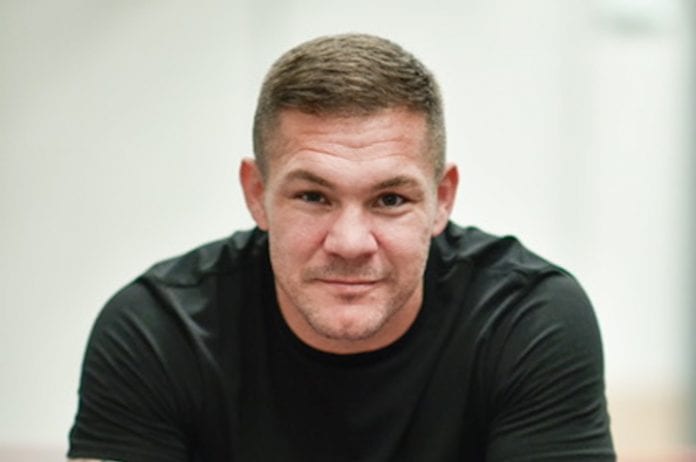 Former British, Irish, Commonwealth and European light middleweight champion Jamie Moore claims that he always knew he was going to become a boxer – something he describes as a gut feeling.

His autobiography Moorsey – The Fighter’s Fighter gives a detailed insight into the rise of the boxing champion and the highs and lows of both his professional career and private life, from troubled teen who found himself on the wrong side of the law to a boxing legend with over 32 wins throughout his career – and surviving a shooting in Marbella in 2014 which left him with a bullet lodged in his right hip and a second bullet which passed through his left thigh.

Nicknamed The Fighter’s Fighter, Salford-born Jamie hung up his boxing gloves in 2010 following his European title win the previous year and now focuses on training the next generation of professional boxers, as well as his private clients, and is enjoying life as a family man, with looking after his kids one of his top priorities.

What first got you started in boxing?

My dad was never a boxer himself but was a huge boxing fan – he was a big Nigel Benn and Mike Tyson fanatic and we used to sit and watch their fights together. As most young kids growing up in the 80’s, I was a big fan of the Rocky films – so when a local gym opened up in my area, I started going when I was 13 years old.

Who have been your biggest influences in the ring?

My biggest influences have been my amateur coach Dave Langhorn for his help in training me when I was younger, my professional trainer Oliver Harrison for all the stuff he did later, and my favourite fighters of all time have to be Benn, Tyson and Arturo Gatti.

My proudest achievement as a fighter is definitely winning the British title – I’m the only fighter from Salford to have held the Lonsdale belt, so I’ve achieved something nobody else has, so it has to be that. And also being involved in Fight of the Year three times has to be up there too.

How does it feel to be training the next generation of professional boxers?

I’m enjoying doing it because I know what it means to them, so I like to try and help achieve as much as they possibly can and help to bring the best out in people. It’s the next best thing to doing it yourself. I feel blessed to be in a position where I’m able to help others. I think helping people is the best thing you can do as a man.

What boxers should we be looking out for and why?

From my camp, Marc Leach is a top prospect from Salford coming through, so keep your eyes out for him, but the gym is full of top level fighters from all different levels so I’m lucky to be involved with such a great bunch of fighters, but even better group of people.
In terms of upcoming fights, definitely look out for – Martin Murray fighting at the o2 Arena in London on 23rd June, Jack Catterall fighting in Belfast on 30th June and Carl Frampton fighting at Windsor Park on 18th August.

I drop my kids at school and pick them up every single day, I’ve been lucky enough to do that ever since they started school, and in between that time you’ll find me in the VIP gym, training either pro fighters or a few close friends who I have trained since before I started coaching full time. Then it’s the dancing or football run in the evening for the kids. I rarely get chance to do much else, but I wouldn’t have it any other way!

Two pieces of advice that have always stuck with me are – if you never want to work a day, find something you love to do, and find a way to make it pay.  And secondly, when you talk, you only say what you already know. But when you listen, you can learn new things. Just be aware of who you listen to.

If things hadn’t worked out in boxing, what else could you have seen yourself doing?

I really don’t know, because boxing was all I ever wanted to do. I worked delivering beer to the pubs from being 15 to 20 years old and I knew I was going to be a boxer. I had a gut feeling. You should always follow your gut instinct. It has a way of leading you down the right path.

Well I don’t think people would expect a boxer to have a miniature chihuahua called Jackson, so probably that – not the manliest of dogs but he’s a little belter.

That there was only one football team – and it was red!

Manchester Arena, as I’ve had some of the best nights in my boxing career there. Old Trafford, the home of the greatest football club in the world. And my house, because that’s where I’m at my happiest with my little fambo.

It’s got to be Manchester United.