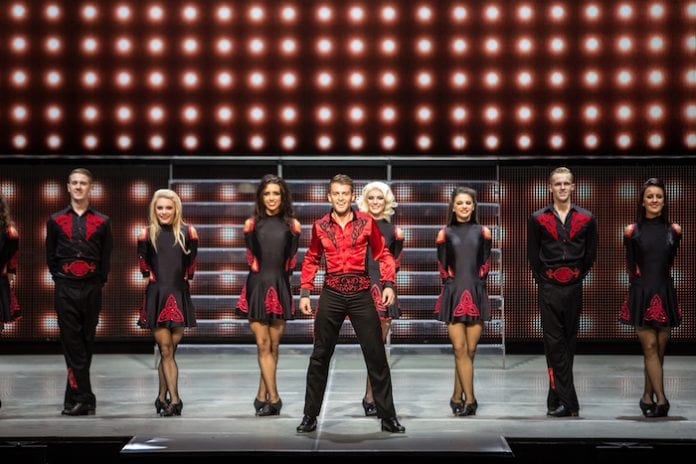 Manchester-born dancer James Keegan, 30, was just four when he first put on his dancing shoes at the Lally School of Irish Dancing in Manchester. By the age of seven he won his first title at the American National Championships before going on to sweep the Irish Dancing awards board winning a total of four American National, eight British National, nine Great Britain, three All Ireland, one European, and two World Championship titles. In 2000, James won every major title that could be achieved competitively in Irish Dancing.

He first appeared in Lord of the Dance aged sixteen. Within ten months he was offered the lead role of The Lord – the youngest ever dancer to perform in the role – and has toured with the show for the last thirteen years. In 2014, when Lord of the Dance: Dangerous Games – created, produced, choreographed and directed by Michael Flatley – premiered to celebrate Lord of the Dance‘s 20th anniversary milestone, James was hand picked by Michael to play the lead, together with two other principal dancers due to the intensity of the show.

Both of my parents were born in Ireland and they wanted my four sisters to keep some Irish tradition and culture alive in the family. When I came along, seven years after my youngest sister, I too was sent along to music and dance classes with them. I was four years old.

My dance teacher Eileen Lalley and all my teachers at the Lalley School influenced me in my early years growing up. But my main influence has been Michael Flatley – from watching him on stage when I was eleven years old at the Apollo Theatre in Manchester, to then performing with him on stage, and receiving one-on-one training from him. He has helped me grow as a performer and a person as well as a dancer.

As a youngster it was winning the World Championships. As an adult I have been so lucky to open Lord of the Dance: Dangerous Games at the iconic Palladium Theatre, followed by a run at the Dominion Theatre, topped by a run in the Lyric Theatre on Broadway, New York. Unbelievable memories.

My day starts quite late. I try and stay in bed until 11am because I usually don’t get to sleep very early the night before. It’s tough to relax after a show so the earliest I get to sleep is about 2am. If I don’t have to travel, my day revolves around food and the gym. I then make my way to the theatre for about 4pm for a couple of hours rehearsal with the cast. Some more food before I start my warm-up and get ready for the show.

If you haven’t already gathered, I love food. We have to eat all the right things though, so on my days off I like to go and eat with friends and maybe indulge a little bit more than I would on a normal working day. I also love to find hidden gems in a city, places off the beaten track.

Dance every performance like it’s your last. Leave everything out there and have no regrets. Same rule applies for lots of things or even day to day life.

I played football at quite a high level when I was younger – Manchester Boys, Man United, Blackburn Rovers. If I hadn’t joined the show I would have pursued a career in football at some level. Coaching perhaps if I didn’t play professionally.

I’ve often been out with friends in a bar or club or at a wedding and they expect me to be like John Travolta on the dance-floor. I’m actually useless!

A big Red. My uncle is Alan Keegan, the stadium announcer. What a job.

I love the Northern Quarter and the wide variety of shops, coffee shops, restaurants and bars. I like walking up Deansgate and turning down random streets and getting lost. And Spinningfields because I think it represents what makes Manchester great. We have so many new and modern parts of the city built next to or within our older buildings.

The weather of course.

The people. We are very proud people and I love that. I travel all over the world and the first thing I say when I get asked where I’m from isn’t the UK, it’s Manchester!

James will be performing as The Lord for six performances in Lord of the Dance: Dangerous Games at The Palace Theatre Manchester from Tuesday 11th April – Saturday 15th April. For tickets book direct with the Manchester Palace Theatre box office on 0844 871 3019 or online at www.atgtickets.com/manchester