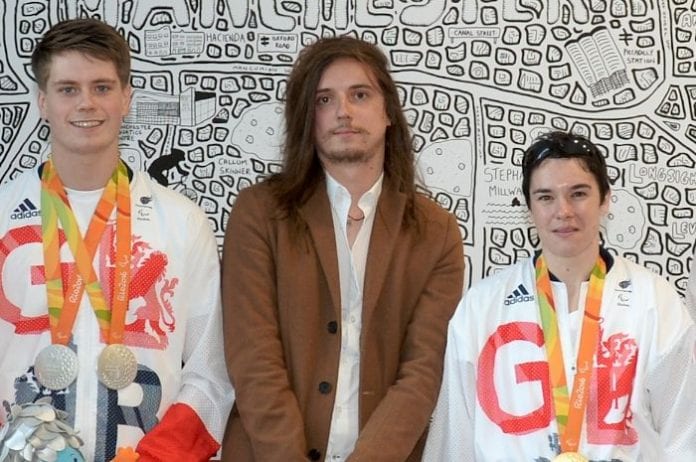 Chesterfield-born, Posca pen doodle artist David Gee, aka Dave Draws, is best known for his murals and maps, many of which are commissioned by businesses and other organisations to depict their local areas. We’ve got one in our office.

His latest project – the biggest yet – is a giant mural celebrating the achievements of Manchester’s medal-winning athletes at the Rio Olympics and Paralympics, which was unveiled at the Manchester Arndale earlier this week.

Dave is currently working on an entirely different exhibition which shows a more abstract side of his work, less well known than his maps. This has a geometric theme and is intended to draw you in in a much more surreal way than his technical landmarks. The exhibition, called simply Dave Draws, will launch at The Bay Horse in the Northern Quarter later this month where the artist will be present to discuss his work and sign collectors prints.

I’ve always doodled. At school it’s fair to say I ignored the teachers a lot of the time, doodling in my schoolbooks instead and that became my style.  I would fill sketchbooks with my drawings, but it wasn’t until a couple of people looked at my stuff and told me that it was any good that I started taking it seriously. In my early twenties I did a couple of murals in Sheffield before moving to Berlin and exhibiting as part of Pop-Up Gallery. It went from a bedroom hobby and snowballed from there.

My mum always doodled too so we would draw together. It was very creative at home. My interest in maps came from my mum who thought it was an interesting subject. She pulled off all the paper maps on the outside of a globe and told me to doodle on that. I also like surrealist painters and they have definitely influenced my more abstract work.

Being able to go freelance as an artist. It’s something I’ve always wanted to do but happened more quickly than expected. In terms of jobs, doing Channel 4’s mural in their office on King Street in Manchester. Another Manchester company, Buy Association, when they flew me to Hong Kong for eight days and I did their mural there. And I’m especially proud of the current mural in The Arndale.

I get up early and get to my studio near Victoria Station by 9am. I respond to emails re job enquiries and any online sales, getting all the admin out of the way. Then I go to the Northern Quarter to pick up any materials and prints before starting on my work. I work on commissions until about 6 or 7pm. I used to take work home with me but I try not to do that anymore.

I see my girlfriend when I can as she still lives in Chesterfield, so either me going there or her coming here. We like to visit restaurants and galleries and see what’s going on in Manchester. I also support Chesterfield FC and like to go and watch them.

To work hard and be persistent. Things don’t just come to you. You need to make them happen.

I honestly don’t know. Before I earnt enough from my work to go freelance I tried a number of career paths but didn’t like being in an office as I like to get out and about. I studied web design but I’m not great with technology and couldn’t get my head round photoshop. I prefer to draw everything by hand. If not drawing it would have to be something creative.

Aside from liking football which everyone is surprised to hear when they meet me, I have some kind of strange affinity with pandas. I drop them in my work whenever I can!

Although I’m a Chesterfield fan I do enjoy the Manchester rivalry in the city.

I live in West Didsbury and love Burton Road, it’s nice and leafy and especially great in spring and summer. The Northern Quarter as it has a great vibe and buzz of creativity and there are always things happening. And although I’ve not yet been inside, I love to draw London Road Fire Station as the exterior façade is so detailed.

Manchester seems to have the worst pavements. Whenever it rains, which it obviously does a fair bit here, there are so many loose pavement slabs that gush out water on my Converse. I constantly have wet feet. So yes, better pavement maintenance would be good.

The thing I’ve noticed here more than any other city I have lived in, is the pride. Mancunian pride is so unique, it has this attitude of ‘we are the best’. And the longer I have been here, I’ve become more proud myself.

Dave’s new exhibition launches at The Bay Horse on 20 October at 6pm. Visit his online shop at www.davedraws90.bigcartel.com Follow him on Twitter @DaveDraws_