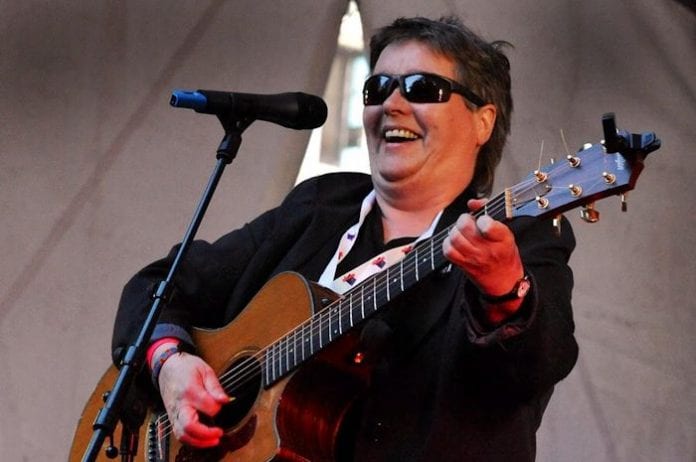 “I have complete belief that everyone knows what they want to be when they are 9”, Claire Mooney told me, twinkle in her eye, in what was certainly no ordinary interview. Sitting in the Grade II listed Elizabeth Gaskell’s House, I was here to talk to her about her life, creative career spanning over 30 years and ongoing work with Gaskell! The Musical, a 10-week project and performance by Claire and community organisation enJOY Arts involving local women. It’s back by popular demand following its success at this year’s Manchester Histories Festival.

Claire spent most of her childhood in Chorlton before going to study in three different cities and getting a postgraduate degree in housing. But she still held on to the aspirations she had when she was nine – to be a singer-songwriter. Despite working as a housing officer for a number of years, she took the plunge into creative pursuits becoming theatre manager at the Abraham Moss Centre in Crumpsall and part of a big community arts event with Opera North. Inspired, she recorded her first album Rocking The Boat which received coverage on both Radio 2 and North West Tonight. Nervous? Nah.

Claire has a strong conviction in her work – “I took it in my stride,” she says. Much of her material is inspired by Manchester’s radical past and features her own guitar playing. She has also written for events including the Social Science Research Festival, using music to raise awareness of issues such as domestic violence. Claire is a proud feminist, has performed at Reclaim The Night events and is a Musicians Union rep. To top it all off she appears regularly on BBC Radio Manchester and BBC Radio Lancashire.

Listening to Top of the Pops – especially the fact that the guitar just seemed to be the instrument that was used all the time. Joni Mitchell and an Irish guy called Christy Moore. I saw him at the Free Trade Hall. He did serious radical political stuff as well as jovial make-you-smile tunes. He brought these different sounds all into a beautiful bouquet. That’s what I try to do at gigs –  get a balance of light and shade.

I’ve beaten you to the question! As well as the two I’ve just mentioned, I was lucky enough to do a songwriting workshop with Ray Davies of The Kinks. One of the exercises was writing a song for another member of the group – a track for them to perform – and I had to write for this guy who was a golfer, a nice guy, but very different to me. Ray said that what I wrote – ‘I Could Fly’ – was a number one hit. He actually said that. And yet it’s still unrecorded. I’ll give you a rendition one of these days.”

Dead hard. I think there’s loads. Longevity- that’s a big thing, plus I’m still enthusiastic and think people have so much creativity in them. I’m proud when people punch above their weight and that’s why I love getting involved with the community and creativity, along with groups like enJOY Arts.”

There isn’t one. It’s a real mix and I like it that way. However, one thing that stays the same is that I pick up my guitar every single day of the year.

Days off!? They don’t really exist. My holiday this year was an overnight stay in Halifax after a festival! I try to include things I find relaxing though and that includes sitting down playing the guitar, and walking on the beach with my partner.

Two things. When I first became self-employed, I got a card from my sister-in-law which said ‘the first step is the hardest’ and that’s it. The start of anything can be the most difficult part. But never give up, and just keep on going. Secondly, make as many creative mistakes as you can. Even when I do workshops I’m a can-do person, I don’t hear no, I hear yes because even if people make mistakes, especially in a group, all can learn from them.

Once I decided to do music there was no plan B, I just had to keep going. It had to work in some shape or form.

I was the first balladeer in residence for Shropshire County Council for over 400 years! I provided a messenger service from the people to the authorities through song! It’s a fun way of talking to people and I was working with an age range of 3 to 93. I also have done a lot of broadcasting. For example, every Saturday morning on BBC Radio Manchester, I write a ditty about the last week’s news balancing major stories with what is a bit off the wall.

I’m a Red – FC United – because I like what they stand for. A decent honest community club, salt of the earth stuff and the passion of the fans is just incredible.

Right here – Gaskell’s House – is one of them. I’ve managed to work on two projects with enJOY Arts here and it manages to lend itself to every section of the community being welcomed in. Full marks to the people who renovated it. Manchester Town Hall, because local democracy is immense and we should treasure it. And 40 Beech Road Chorlton which is Creative Recycling, a shop of exquisite beauty and goodness – with a workshop at the back called The  Shed. It’s an engaging, gorgeous space, always with a beautiful audience when I perform there.

Safety for women – as I’m involved in Reclaim the Night marches –  but we shouldn’t need them. Women should be able to walk the streets and feel safe. There needs to be a lot more policing and education.

I do love its friendliness. It’s home to me. I feel a warmth here and that’s special. Plus the city’s radical past, that it’s led the way through women getting the vote, Peterloo, protesting against Clause 28. We actually get on the street here and show what we believe in.

Gaskell! The Musical Thursday is being performed at Elizabeth Gaskell’s House on September 22, 2016. Tickets here