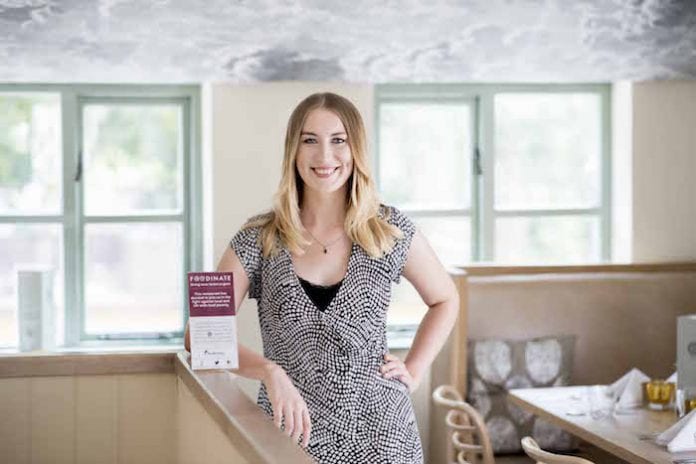 Chorlton-born Caroline Stevenson has just returned from the Scottish Business Awards where she picked up her award as winner of RBS and Entrepreneurial Spark 2016 Boost a Business Award, meeting Leonardo DiCaprio in the process (as you do). Still only 24, she was one of five finalists picked from over 800 businesses in the Entrepreneurial Spark scheme, receiving over 68% of the  public vote for Foodinate, the social enterprise she founded last year.

Foodinate aims  to create a sustainable impact on food poverty in Manchester with its meal for a meal concept. Every Foodinate branded meal sold on the menu of restaurants participating in the scheme results in a meal for a local person in need served at The Booth Centre in Manchester. The meal is paid for by the participating restaurant, not the customer. Over the past twelve months the not-for-profit scheme has secured over 5,000 meals for homeless people.

Shortly after the launch of the pilot last September, Caroline won Entrepreneur of the Year 2015 at the Free 2Network Business Awards and is currently up for three more awards at the Great British Entrepreneur Awards and Talk of Manchester Awards, so she’s clearly doing something right. Caroline is currently working on expanding the Foodinate concept to a national level.

Without trying to sound clichéd, we live in one of the richest countries in the world yet the level of need on the streets of Manchester made me feel angry. I’ve always had enterprises on the go, through school and my teens. I wanted to funnel these experiences and felt a sense of urgency to do something about the increasing homeless problem.

My mum. She had her own social enterprise, Active Age, going into care homes and providing activities for the elderly, both for body and mind. I get my inspiration from her.

During the voting process of the Boost a Business Award, the fact that I won with 68% of the public vote was overwhelming. 132 comments were left by people from across the UK.  Their messages of support and encouragement showed how much they were really rooting for Foodinate to be a success. That meant more to me than the actual award.

I get up about 7am and check my emails. Although I can work from home, I like going to another space to work, so I come here [the RBS Entrepreneurial Spark Hatchery in Spinningfields where Caroline and eighty other new businesses are based] for about 9am and will have meetings booked in most mornings. Business development is ongoing. I visit restaurants to talk them through the scheme and secure new participants. I tend to be home by half six but often carry on working from there, although I do try to switch off when I can

What does that mean?! I love travelling although I don’t have time for that at the moment so sometimes I will just get in my car and drive somewhere new. I like to play netball to take my mind off things for an hour or so. And simple things like a relaxing bath with candles.

The best advice I can give and I always follow myself is never forget to say thank you. When someone goes out of their way to give you an introduction or do something that benefits you, it’s so easy to take it for granted. We all have such busy lives but these little things, a handwritten card, some flowers, might really lift their day and make a difference to them as well as how much they have helped you. It’s really important, and it always pays off.

I can’t imagine going back into employment. I hope Foodinate will be a success but if it wasn’t to work out I’ve always got a million ideas in my head and I would give one of those try.

I’m a bit of an adrenalin junkie. Rock-climbing, skydiving, bungee jumping. I’m up for most things.

Red by heritage, but I don’t really follow football.

Any participating Foodinate restaurant firstly! The Booth Centre as I love to visit there and see the impact they have. Their involvement is invaluable, and they train ex-homeless people to work there too which is really important. And I like The Northern Quarter, I like getting lost in all the little back alleys as there’s always something unexpected to be found.

I love Manchester, but it would be nice to see more green spaces in the city centre, somewhere you could go and play rounders maybe?

The people. They are generally friendly and welcoming. And no matter who you are or where you are from, there is something for everyone here.