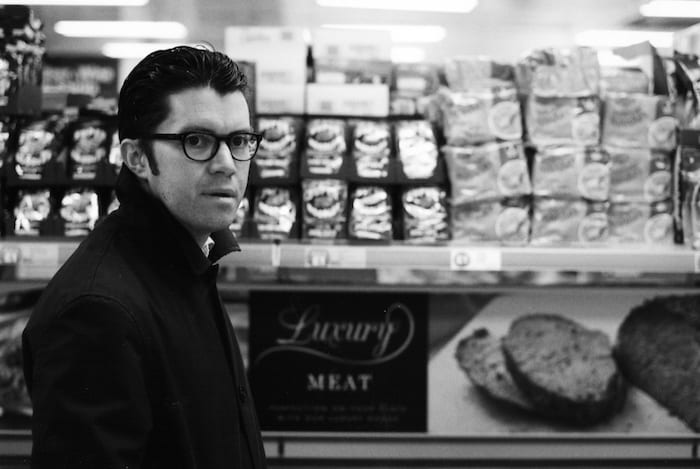 What’s evident when I sit down with writer Austin Collings is that this interview will be a bit different from any other 12 Questions interviews I’ve done.

Born in Radcliffe, or dogshit valley as he calls it, he is self-taught, preferring the education of books, records and films he received from his parents than anything school could offer. He talks with ambiguity, without restraint, in short sentences, just like his book, The Myth of Brilliant Summers, a collection of very short glimpses of life in the north. Observations of the familiar, the bits in between when things happen. Written like poetry, songs even. Uncompromising. Bleak. But with a wry humour. It’s all Austin.

“What Morrissey does for song lyrics, Collings does for fiction,” said The Huffington Post. Apt then that he also co-wrote the memoirs of The Fall frontman, Renegade: The Lives & Tales of Mark E. Smith. They were made for each other is all I can say.

He is associated with The White Hotel. Just in case you haven’t heard of it, it’s not a hotel. It’s not a club either, despite being voted the 66th best in the world. In Austin’s words “it’s an institution, in that it should be sponsored by the NHS.” He doesn’t really have a job there, he says. Rather he’s involved like you would be in a serious crime. Welcome to the bizarre world of Austin Collings.

One of the first books that made a big impression on me was Stephen King’s Salem’s Lot. I got it off a kid at school called Grandad, it was his dad’s copy, or great grandad’s. I liked it as it had a good cover and lots of swearing. It was like a portal into an adult world.

I read Charles Bukowski’s Post Office when I was fourteen. I suppose you could say he was an influence on me in that he was good at drinking and writing. I used to try writing in pubs. I wanted to look clever and get women. That never happened. My words looked like deformed spiders. I got to the point where I was kidding myself. I have to concentrate far more now.

I don’t have one. I’m not very prideful, like Guy Garvey. I would have liked to win Wetherspoon’s award for writing. It’s better than the Booker Prize.  I thought about entering that (but didn’t.)

It depends what happened the night before.

Brush your teeth. An old Geordie mate of mine who looked like Samuel Beckett at the end of a two-day bender once told me ‘never eat on an empty stomach.’

I don’t think things have exactly worked out. I think if they had I should give up writing. Writers all have problems in their lives, which is why we escape in our writing. I like struggling. It’s how an artist should be.

I have never seen my Dad eat a packet of crisps.

Quite a lot. People who work on Northern Rail. Ticket inspectors at Northern Rail. They’re like the East German Stasi. And chefs, the ones that charge extortionate prices, like potatoes that cost the same price as a pair of shoes. Get rid of them.

Kids with e cigarettes. Kids that terrorise Metrolink drivers. All the science fiction. It’s not all avatars and blockbusters. The other day there was a man wondering around the library with an empty milk bottle. It’s David Lynch but more real than Coronation Street.

See Austin Collings’ The White Hotel Presents: 2000AD at the Sounds From The Other City Festival, The Kings Arms, Salford on Sunday 30th April. Expect bad language and some shocking adult content as the demented musical-theatre production reclaims the pub as a theatre for one night only.