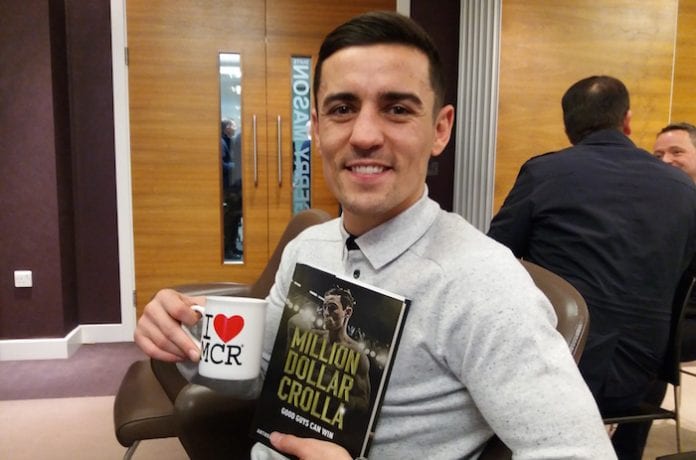 You don’t need to be into boxing to like Anthony ‘Million Dollar’ Crolla.

I don’t know much about the sport, but when I went to interview him prior to a photo session and a Q&A with his fans at the Bierkeller on Saturday, I was impressed by his ability to both look confident and be humble at the same time.

The former British and World lightweight champion had his first amateur fight at eleven. He remembers going to the Manchester Arena and watching Naseem Hamed and Ricky Hatton and dreaming that one day he would perform on that same stage.

After a challenging journey and nearly twenty years of hard work, Crolla says he feels he’s one of the very lucky minority of people who get to live their dream.

“Winning on that stage (at the Manchester Arena) was so special to me. It doesn’t get any better than people cheering your name in your hometown. I felt like the luckiest man in the world that night.”

Following the well documented injury that almost ended his career a few years ago, Crolla had screws in his ankle which came loose earlier this year after a long flight to Thailand. Now he’s fully recovered from his operation to remove the screws and is back in the gym, hoping to have his next big fight in the autumn.

My dad was an ex-professional boxer so from an early age I was taken to the gym because there was no one to mind me and you just end up picking up the basics.

There’s a tie between my amateur coach Jimmy Lewis and my current professional coach, Joe Gallagher. Early in my career a lot of people had given up on me. I’ve never thought I’ll reach anywhere near the heights that I have and he (Lewis) has always believed in me. 82 years old and he’s still in with the kids three nights a week. He’s been doing it for 50 years or something. Great, great man.

Two: one being a dad. I’ve got a little boy who’s four-and-a-half years old. He’s a little terror. Then, obviously, winning that world title here in Manchester.

Up early, school run, then it’s breakfast, strong coffee, to the gym, a little bit of food, gym again and then at the night it’s usually a yoga session or a swim, so it’s like three sessions a day. It’s hectic. And I spend a lot of time in traffic and on the motorway as well.

It’s not rock’n’roll. It’s either a coffee shop or I’ll go and watch United if they’re playing.

I think I would’ve stayed involved in sports somehow, whether it would’ve been some kind of personal trainer or something. Other than that, my aim now, for when I finish boxing, is to work with disadvantaged kids in the area. Where I’m from there are a lot so I’d like to work with them and help keep them out of trouble hopefully.

I’m a sucker for reality TV. I was more excited for Love Island than I am for the World Cup. My apologies for this.

One, the people – friendliest people in the world. Two, Manchester Arena, which has been so special to me, I had many big nights there. Three, it’s got to be Old Trafford.

The drugs and homelessness are big problems at the minute. It’s really sad. I’m sometimes in town early in the morning training and I see the amount of people sleeping rough. We also know that Spice is a terrible problem in our city and it’s so sad to see. That’s what I wish I could change.